BJP has alleged that Kartikeya Singh is close to criminal-turned-politician Anant Singh, who is serving a jail term 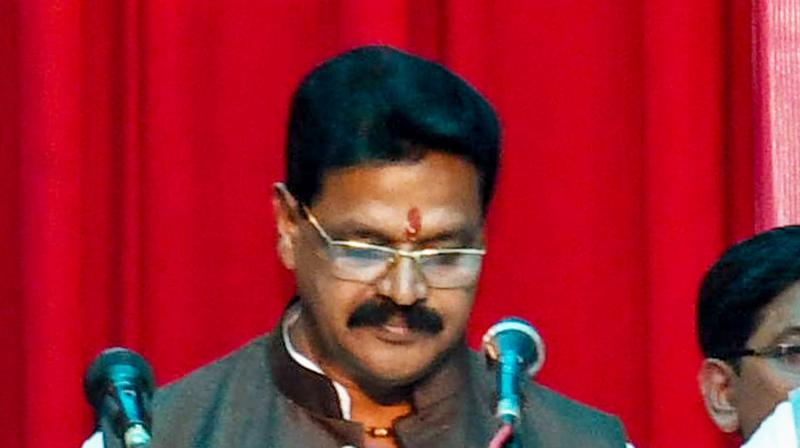 Patna: The BJP on Wednesday released a document showing that Bihar’s new law minister, Kartikeya Singh, an RJD MLC, had a warrant against him when he was sworn in. The BJP has alleged that Kartikeya Singh is close to criminal-turned-politician Anant Singh, who is serving a jail term.

An arrest warrant has been pending against Kartikeya Singh in a case related to a 2014 kidnapping case. Reports suggest that 16 others are accused in the case, including former Mokama MLA Anant Singh.

The BJP says Kartikeya Singh was supposed to surrender in the Danapur court but instead went to Raj Bhavan and took oath as minister in the Nitish Kumar-led Mahagathbandhan government.

“Kartikeya Singh should have surrendered if he had a warrant against him. But he was allocated the law ministry and took the oath on a day he was to surrender in a court,” said senior BJP leader and Rajya Sabha MP Sushil Kumar Modi.

He said: “I want to ask whether Nitish Kumar is trying to bring back the old Lalu regime by inducting people with criminal backgrounds.”

The BJP referred to the criminal history of other RJD leaders who have been inducted into the state Cabinet. “There are over a dozen of such leaders, including Surendra Yadav, Lalit Yadav and Ramanand Yadav, who have a criminal background but were inducted into the Cabinet,” said senior BJP leaders in Patna.

Notably, Kartikeya Singh was earlier granted interim bail till September 1 by the court.

Bihar Chief Ninister Nitish Kumar refused to comment on the issue, saying he was not aware of any such warrant against the law minister.

On Tuesday, after Nitish Kumar expanded his Cabinet, the BJP held a crucial meeting of the Bihar core group with the central leadership in New Delhi to discuss future political strategies.

Sources in the BJP said that “major organisational changes are expected in the state unit after the party lost power”.

Reports suggest that the selection of a new BJP state president was also discussed at the meeting. There is also a buzz that the central leadership asked its state unit to reach out to voter bases of the Mahagathbandhan parties, including Chief Minister Nitish Kumar’s JD(U), in Bihar and create awareness about the achievements of the Central government.

A BJP leader said, “The state unit discussed the current political situation of Bihar after Nitish Kumar betrayed the people by forming an alliance with the RJD and Congress.”