Nandigram is a lucky place for me. If I contest here..how is it? It is my wish, says Mamata Banerjee 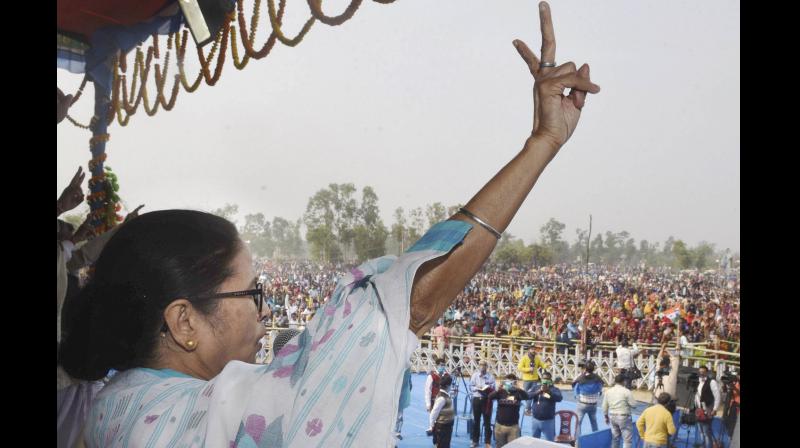 In her first visit to Mr Adhikari's home turf after his induction to the BJP, the West Bengal chief minister also declared that she would also try to contest from her home constituency Bhowanipore. (Photo:PTI)

Kolkata: Playing a masterstroke to avenge Shubhendu Adhikari's resignation as the MLA of Nandigram and exit from her party, Trinamul Congress supremo Mamata Banerjee on Monday announced that she would contest the hot seat, also "lucky" for her since her movement against forcible land acquisition there ousted the Communist regime a decade ago, in East Midnapore in upcoming Assembly Election.

In her first visit to Mr Adhikari's home turf after his induction to the BJP, the West Bengal chief minister also declared that she would also try to contest from her home constituency: Bhowanipore, which elected her as TMC MLA in 2011 and 2016, simultaneously. Soon after her announcement, Mr Adhikari vowed to ensure her defeat in Nandigram.

Banerjee told a TMC rally, "Nandigram is a lucky place for me. If I contest here..how is it? It is my wish. I was thinking of it because I love the place being rural and close to my heart. Our victory for the assembly polls will start from here. It is a reincarnation of Nandigram. I will field a good candidate in Bhowanipore which is also a place of my affection. It is like my elder sister while Nandigram is the younger one. I will contest the polls from both the constituencies if I can. But I will certainly contest and lead the poll campaign from Nandigram."

She said, "People of Bhowanipore may feel sad. If I can manage it then it is ok. It is the call of my conscience to make the announcement here since I had declared the name of our first candidate here before the 2016 Assembly polls. O my mother, slap on face if any mistake happens but do not turn your face and mind away from us."

Her major announcement triggered a cheer among the crowd at the rally which was however skipped by Shubhendu's father and three-time TMC MP of Contai Sisir Adhikari and his brother and party MP of Tamluk: Dibyendu Adhikari.

Mocking the BJP for causing defection in her party, Ms Banerjee observed, "Some are switching sides. Do not worry about them. They will be fought by locals. Those leaving the TMC were not around when the party was founded. Let them go. It is good. BJP is a washing machine which turns black into white. Washing Powder Bhajpa, Washing Powder Bhajpa! The BJP's situation is like that. But I will not allow them sell Bengal at any cost."

She also took a dig at the saffron party over the "leak of gameplan" in the Pulwama attack in a veiled reference to a transcript of journalist Arnab Goswami's conversation. Leading a massive roadshow in her home turf later, Mr Adhikari told the CM, "Nandigram has come to your mind after five years because another election has come. You said you would fight from Nandigram. Mark my words: I would quit politics if I can not ensure your defeat by 50,000 votes whoever, me or someone else, the BJP gives a ticket to fight you."