The Aayog also set up a high level committee on agriculture to suggest reforms aimed at benefitting farmers and reviving rural economy. 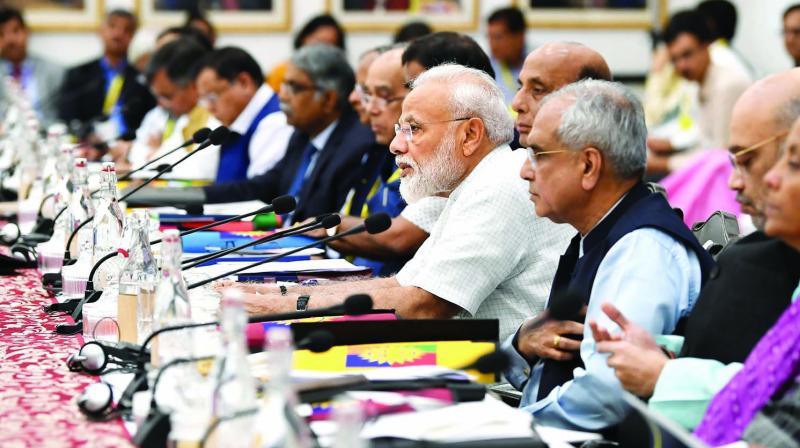 Prime Minister Narendra Modi chairs the fifth meeting of the governing council of the Niti Aayog in New Delhi on Saturday. (Photo: PTI)

New Delhi: Spelling out his government’s “Vision 2024” at the Niti Aayog’s fifth governing council meeting, Prime Minister Narendra Modi on Saturday said the goal of making India a $5 trillion economy by 2024 is challenging but surely achievable, as he asked states to focus on their core competencies and work towards increasing the GDP right from the district level. The Aayog also set up a high level committee on agriculture to suggest reforms aimed at benefitting farmers and reviving rural economy.

At the council meeting held at Rashtrapati Bhavan, the Prime Minister underlined the need for taking effective steps to tackle drought and stressed that Niti Aayog has a key role to play in fulfilling the mantra of “Sabka Saath, Sabka Vikas, SabkaVishwas”. This was the first meeting of the planning body after the BJP-led National Democ-ratic Alliance (NDA) formed a new government at the Centre. It was attended by senior Union ministers and almost all the chief ministers, except Mamata Banerjee (West Bengal) and K. Chandrashekhar Rao (Telangana). Punjab chief minister Amarinder Singh who could attend the meeting due health reasons deputed his finance minister Manpreet Badal. Ms Banerjee had earlier said she would not attend the meeting saying Niti Aayog is a “fruitless” body as it has no financial powers.

In his opening remarks, Mr Modi noted that the export sector is an important element in the progress and both the Centre and states should work towards its growth, in order to raise the per capita income. He said a thrust on export promotion at the state level will provide a boost to both income and employment.

Stressing that the focus should be on collective responsibility for achieving short term and long term goals, Mr Modi said the goal to make India a $5 trillion economy by 2024, is “challenging, but can surely be achieved”. The size of India’s economy was estimated at $2.75 trillion at end-March 2019.

On the health front, Mr Modi said tuberculosis should be wiped out by 2025. He urged states that have not implemented the Central government’s health insurance scheme to come on-board.

Sources aware of developments said that Mr Nath expressed concern over the fact that despite India being a major producer of coal, the dry fuel was being imported.

The chief ministers were informed by Niti Aayog officials that a report of a task force on mining will come out soon and all the concerns would be addressed in it.

Most of the chief ministers unanimously sought greater devolution of funds from the Prime Minister, to which he is learnt to have said that a final call on it will be taken once the report of the 15th Finance Commission arrives.

The chief ministers were also informed that there would be some amendments to the rules related to the National Disaster Response Fund (NDRF) which would give them better financial leeway to combat natural calamities.

Delhi chief minister Arvind Kejriwal said during the meeting that the state was the second highest revenue generating state through income tax in the country after Maharashtra, yet adequate funds were not being provided to it. He reiterated the demand of full statehood for Delhi. Puducherry chief minister V. Narayanasamy also echoed the demand for statehood.

Referring to challenges posed by Naxal violence in aspirational districts, Mr Modi said violence will be dealt with firmly.

The governing council also discussed that chief ministers should take up the issue of water conservation on top priority and create awareness about it, just like the Centre has aggressively promoted the Swachchh Bharat Mission.

Describing water as an important element for life, the Prime Minister said that the poor bear the brunt of insufficient water conservation efforts. He said that the newly created Jal Shakti ministry will help provide an integrated approach to water.

Mr Modi said that the aim is to provide piped water to every rural home by 2024.

Underlining the need for structural reform in agriculture, the Prime Minister spoke of the significance to boost corporate investment, strengthen logistics, and provide ample market support. He said the food processing sector should grow at a faster pace than foodgrain production.

Prior to Niti Aayog’s governing council meeting, former prime minister Manmohan Singh earlier in the day briefed all the chief ministers of Congress and party-led coalition ruled states, where he expressed concerns over issues including growing unemployment, revival of the agriculture sector, and the need to bring naxal affected states under financial mainstream.

The chief ministers were directed to take up these issues during the governing council meeting.