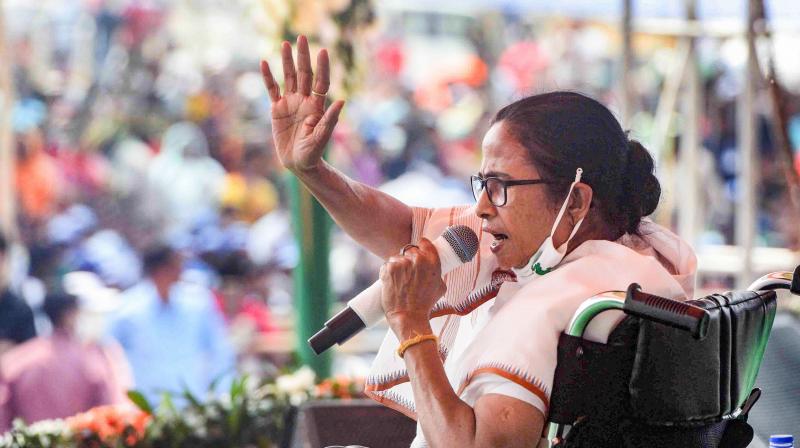 Banerjee also slammed the home minister for the deaths of CRPF jawans in an encounter with Naxals. — PTI file photo

New Delhi/Kolkata: West Bengal chief minister Mamata Banerjee on Wednesday accused Central paramilitary forces, especially the CRPF, of harassing voters at the behest of the BJP and asked voters not to deterred by their intimidation but to gherao them and lodge FIR against them if they foment trouble in the remaining five phases of Assembly elections in West Bengal.

The TMC chief also alleged 10 murders in this election and urged the Election Commission to ensure that there is no further blood bath and no public harassment by Central forces.

Hours after the TMC chief's controversial appeal to voters issued at a party rally in Coochbehar North Assembly constituency in north Bengal, the Election Commission issued a notice to her for an earlier appeal she allegedly made to Muslim voters while campaigning in Hooghly. She had urged them not to allow their votes to get split among different political parties.

Ms Banerjee has been asked to respond to the EC’s notice within the next 48 hours.

The notice said the poll panel had received a complaint from a BJP delegation alleging that on April 3 Ms Banerjee appealed to Muslim voters not to let their votes get split among different political parties.

"Kanyashree, Kanyashree, there are scholarships up to the university. There is Shishashree for Scheduled Castes and Scheduled Tribes. For the general category there is Swami Vivekananda Scholarship. There is Aikyashree for my brothers and sisters belonging to the minority community and I have given it to 2 crores and 35 lakh beneficiaries. I am requesting my minority brothers and sisters with folded hands don't divide the minority votes after listening to the devil (shaitaan) person who had taken money from the BJP. He passes many communal statements and initiates clashes between the Hindu and the Muslims. He is one of the apostles of the BJP, a comrade. The comrades of CPI-M and BJP are roaming around with the money given by the BJP to divide the minority votes. Please don't allow them to do so. Keep in mind that if the BJP comes into the government then you will be in severe danger. I also will tell my Hindu brothers and sister not to make division amongst yourselves as Hindu and Muslim after listening to the BJP," the notice quoted Ms Banerjee as saying.

The EC said it found her speech violating the provisions of the Representation of the People Act and the model code.

Ms Banerjee’s statement on Wednesday is also likely to land her in trouble.

“We want a free and fair election. Public should be allowed to cast their votes. CRPF should not obstruct them from entering the voting centres. The CRPF is doing a nuisance. I respect the CRPF which have real jawans. But I do not respect the CRPF which is doing nuisance by beating women and killing and harassing the people. I do not support them."

“If the Central forces, say CRPF or even the Bengal force ask you to not to cast your votes, tell them I will not listen to you. Lodge an FIR or diary against them. If the CRPF creates trouble, you, the women, gherao them totally. While one group will keep the forces gheraoed, another will go to cast your votes. Do not waste your votes anyway,” she said at a TMC rally.

Condemning the statement as “anti-national", the BJP complained to the Election Commission and demanded a case against her and cancellation of her party's registration.

In her speech, Ms Banerjee also slammed the home minister for the deaths of CRPF jawans in an encounter with Naxals. "So many jawans were killed in Sukma. What has the government done? As a home minister you could not protect the lives of police either at Sukma or Pulwama. What do you think about yourself? On one hand they are getting killed on the other they are dispatched for poll duty with a direction to them to ask the people to cast their votes for the BJP… A complaint of molestation of a girl has come. Why did they molest a girl? Don't do anything wrong. People say, 'A King can not do wrong.' But you are the king who is doing everything wrong. The CRPF is doing all these on Mr  Shah's orders,” Ms Banerjee said.