'Justice for Sushant' is BJP's slogan for Bihar poll campaign 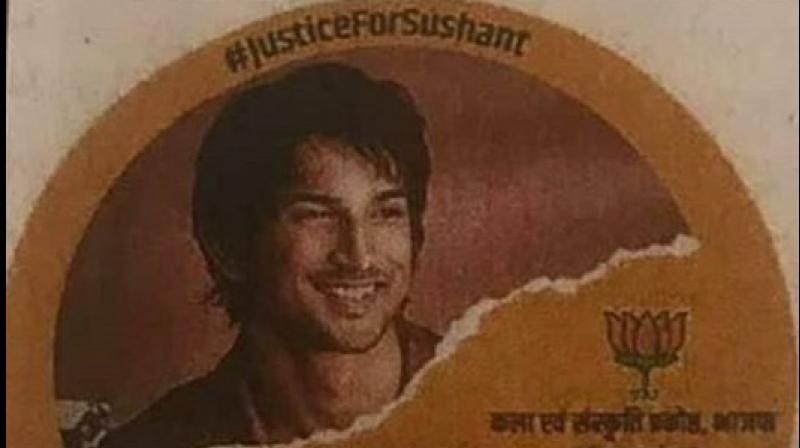 Opposition parties are of the view that posters and pamphlets have been released to influence voters ahead of assembly elections scheduled in October – November this year.

Talking to reporters in Patna RJD spokesperson Mrityunjay Tiwary said, “Tejashwi Yadav was the first to demand a CBI probe into the case but never used it for political reasons. It’s tragic to see BJP doing politics over someone’s body”.

Dismissing the Opposition’s allegations BJP leaders in Patna said that the posters were released by the art and culture wing of the party and has nothing to do with politics. According to BJP spokesperson Nikhil Anand, “Sushant is the son of the soil who represented Bihar in Bollywood. His untimely death has been a shock to all of us which is visible not only in the Bihar but globally. Bihar BJP has stood by the demand of justice for the late Bollywood actor”.

Sources said that posters and pamphlets with the slogan “Justice for Sushant” and “Naa Bhoole hain naa bhooleny dengey” ( we have neither forgotten not let anyone forget) have been distributed all across the state especially among the youths.

The party is also planning to release a video on the life and struggle of Sushant Singh Rajput on the social media soon.

“The art and culture wing of our party is a forum of artists belonging to all streams and have found their way to express solidarity and love for Sushant Singh Rajput. Not only they are paying tribute but have plans to keep the memory of Sushant alive through different activities. There should be no political interpretation to the genuine concern expressed by any forum of Bihar BJP”, Nikhil Anand said.

Sushant Singh Rajput who hailed from Patna was found hanging at his apartment in Mumbai’s Bandra June 14. The case was handed over to CBI after a tussle between Maharashtra and Bihar police. The state government had recommended CBI probe into the case after Sushant Singh Rajput’s father KK Singh filed an FIR against actress Rhea Chakraborty, her family and six others for abetment of suicide of his son and fraud.