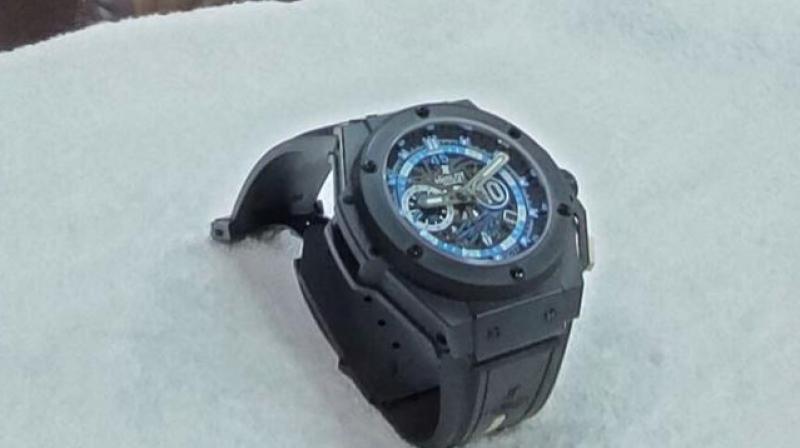 The stolen watch that police claimed to have recovered, which was customised for the legendary footballer Diego Maradona, in Sivasagar on December 11, 2021. (PTI)

GUWAHATI: The Assam police on Saturday recovered a limited edition luxury watch said to have been used by football legend late Diego Maradona. The watch worth Rs 20 lakh that had gone missing from Dubai was recovered from the possession of one Wazid Hussain who used to work in Dubai as a security guard and had returned to India recently.

Sivasagar district superintendent of police Rakesh Raushan told this newspaper, “We received some confidential input on Friday from our special DGP G.P. Singh who was tipped off by Indian federal law enforcement agencies on request of Dubai police to recover the heritage Hublot watch.”

He said, “Based on information, we launched an operation last night and apprehended Hussain from the house of his in-laws. We also recovered the watch from his possession.”

Informing that the accused was not cooperating or revealing the entire modus operandi, Raushan said the watch was recovered in a good condition.

Assam director general of police Bhaskar Jyoti Mahanta said that the watch belonged to Maradona himself and was being stored in Dubai along with other belongings in a safe house. Wazid Hussain worked as a security guard at a private company in Dubai where Maradona’s belongings were stored. In August, he asked for permission to return to India as his father was unwell.

The watch has the football legend’s photo, with arms raised in victory, engraved on the back of the Hublot Big Bang Maradona case. It also has his signatures and jersey number.

Diego Maradona is one of the greatest football players. He died of a heart attack in November 2020.