According to police reports, the police officer and two journalists were assaulted by the couple in the fracas that followed. 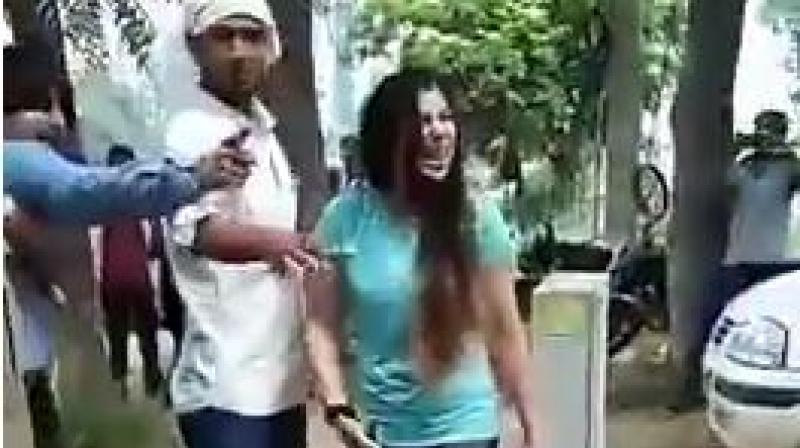 The police said the 28-year-old woman is a chartered accountant and her husband, 32 , is an engineer. The two are residents of a condominium in Sector 90, the police said. (Photo: video screengrab)

Gurgaon: A young couple was arrested after allegedly dragging a traffic police officer on the bonnet of their car after they were asked to stop after jumping a signal at Sohna Road. The incident took place around 9.45 am at Vatika Chowk on Sohna Road when traffic police constable Sunil Kumar spotted a silver Honda City jump the traffic signal.

According to police reports, the police officer and two journalists were assaulted by the couple in the fracas that followed.

“The constable came in front of the car and signalled the driver to pull over. The driver stopped the car, after which the two sitting in the rear seat stepped out. The woman took control of the wheel and her husband sat on the passenger seat, and they accelerated in a bid to escape. But the constable jumped on to the car’s bonnet as they drove off, and hung on for 45 metres,” said Shamsher Singh, assistant commissioner of police (crime), reported Hindustan Times. The driver was standing near the car when they tried to flee from the spot, police said.

The police said the 28-year-old woman is a chartered accountant and her husband, 32 , is an engineer. The two are residents of a condominium in Sector 90, the police said.

Constable Sunil Kumar told Hindustan Times, “I raised an alarm and asked the rider to intercept the car, after which the woman applied the brakes. The couple started abusing me and threatened that if I ever tried to stop their car, they will kill me,” he said.

Police also said that the two journalists from a local news channel in the city spotted the scuffle and started recording the incident. The woman upon seeing the journalists taking the video, she snatched their camera away and assaulted him.

The incident was caught by a few onlookers on video, where the couple are seen shouting and assaulting traffic officials and journalists who recorded the incident.

“The constable sustained minor injuries as he fell to the ground when the car was stopped abruptly after a constable intercepted the car on his motorbike,” said Shamsher Singh.