Manmohan Singh paints bleak picture of economy ahead of budget

That the Indian economy is not in a good state is obvious, said the former Prime Minister. 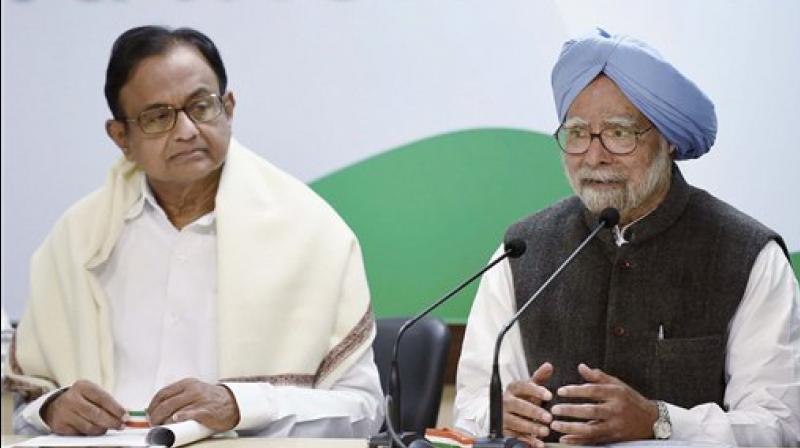 New Delhi: A day before presentation of Economic Survey, former Prime Minister Manmohan Singh on Monday painted a bleak picture of the Indian economy insisting "it is not in good shape" while former Finance Minister P Chidambaram said the government is "hiding behind" GDP numbers that are being challenged.

Releasing the "Real State of Economy 2017", a document prepared by the Congress research cell at the party headquarters here, Singh said it speaks about the state of India's economy, its many issues and where it is heading.

"That the Indian economy is not in a good state is obvious. Even IMF has downgraded our GDP growth and it will not be 7.6 per cent but less than 6.6 per cent," he said.

Chidambaram said the state of the economy "is not something that we can be happy about" and expressed concern over the low credit growth which he claimed is at 5 per cent, the "lowest in several decades".

"BJP is hiding behind a GDP number which is being challenged. People are not dazzled by it, but are asking where are the jobs?”

"NDA government tends to believe exaggerated version of economy, this research document is closer to truth than what government will say tomorrow," he said.

Chidambaram said every government must be optimistic, but optimism must stem from a realistic assessment of situation.

"Yet, if government presents tomorrow a rosy picture of the economy, people of India are entitled to question that. There are no jobs, capital formation is declining, credit growth is the lowest in several decades," he said.

Chidambaram wanted government to focus on fiscal consolidation and said, "there are serious question marks on this government's ability to follow fiscal prudence".

He dismissed suggestions that the 2008 farm loan waiver was a populist measure, saying, "It was based on the response to a demand from the farming community and was a very wise decision."

"This was especially so as the international financial crisis hit in September 2008, which crippled even major economies but did not affect India much," he said.

He claimed that while there are no jobs, new capital investment and no credit growth, the document released "candidly, truthfully" assesses the state of India's economy, supported by hard research and data.

Hoping that government will not cut social sector spending, the former Finance Minister claimed that the MNREGA was the lone scheme that provided some succour to poor by way of jobs.

"There is a 60 per cent spurt in demand for MNREGA jobs. If they are cut, then it would be a very cruel cut. This demand is because of loss of jobs and. I sincerely hope that this government will not make this cardinal mistake of cutting expenditure," he said.

Congress spokesperson Rajiv Gowda said, "The slowdown in the Indian economy in the wake of demonetisation will last four to five years."

He told the government that it should not use the issue of universal basic income tax an excuse to attack social safety net.