Due to its toughness, making to the finish line is considered a huge achievement. 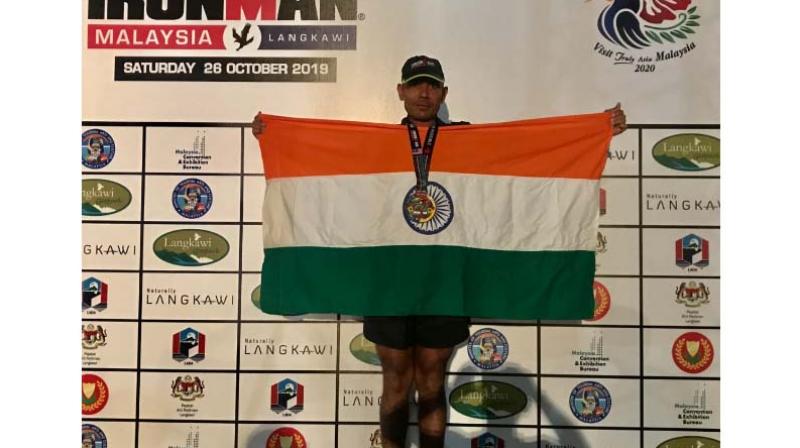 Ironman triathlon consists of 3.8 kilometres of sea swimming, followed by 180 kilometres of cycling and finally 42.2 kilometres of running without stopping. All events are required to be done in a cut- off time of 17 hours.

Due to its toughness, making to the finish line is considered a huge achievement.

Ironman race started in 1978 in Hawaii, when a naval officer thought of combining three of the toughest races that were held out on the island.

Ironman Malaysia was organised on 26 October 2019 on Langkawi island, Malaysia.

Lt. Col. Kuntal was the fastest Indian finisher of full Ironman. This timing is special due to very harsh weather conditions and the gruelling elevation in bike course. Ironman Langkawi is one of the toughest because it has an elevation of around 3,000 m in the 180 kms bike( cycling) course. During cycling, maximum temperature reached 38°C and running it reached 35°C. These harsh conditions tested mental toughness and physical strength of the athletes.

Lt. Col. Kuntal is posted in Jhansi. A paratrooper and an IITian, he trained very hard in run up to Ironman Langkawi Malaysia. Extensive running, cycling, swimming and strength training were part of regular routine. It was extremely difficult to manage time due to office commitments. Night and late and early hours were used for the training.

Lt. Col. Kuntal has won and participated in many marathons and ultra-marathons. He has won 12 hour stadium run at Chandigarh, where he covered 118.7 kms. He has represented Uttar Pradesh in 23rd national road cycling championship 2018. Earlier in September 2018, Lt. Col. Kuntal won Ironman at Jaipur International Triathlon.