Red alert in UP after heavy rainfall; 73 dead, life at standstill

UP received record rainfall - 1700 per cent above normal - on Friday. The eastern parts of the state are worst hit. 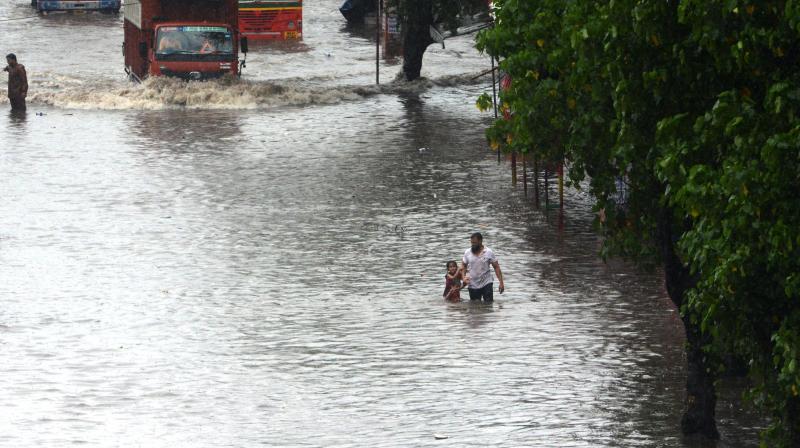 Twenty six deaths were reported from different parts of UP on Saturday. Forty seven deaths died across the state in rain-related incidents on Thursday and Friday. (Photo: Representational image)

Lucknow: Around 73 people have died in last four days in Uttar Pradesh where several regions have received above-average rainfall this week.

A red alert, warning heavy to very heavy rainfall, has been sounded by the weather office in most districts of eastern Uttar Pradesh, NDTV reported.

In Bihar, several lives were affected in Patna after heavy downpour since Friday has triggered major traffic jams and waterlogging in many parts.

Amid heavy rain in Patna and other parts of the state, several trains were cancelled this morning.

On Saturday, a meeting was called by Chief Minister Nitish Kumar with the officials, via video conferencing, to review the situation.

Heavy rain has also been reported in Uttarakhand, Jammu and Kashmir, Rajasthan and Madhya Pradesh where several people have died in rain-related incidents in the last few days.

Uttar Pradesh received record rainfall - 1700 per cent above normal - on Friday. The eastern parts of the state are worst hit. On Saturday, Prayagraj received 102.2 mm of rain and Varanasi received 84.2 mm of rain, much higher than what is usually received at this time of the year.

Twenty-six deaths were reported from different parts of UP on Saturday. Forty-seven deaths died across the state in rain-related incidents on Thursday and Friday.

In Lucknow, Amethi, Hardoi and some other districts, schools were closed on Friday and Saturday due to heavy downpour.

The Chief Minister also asked the officials to extend monetary help of Rs. 4 lakh each to the family members of those killed.

The weather department has issued a warning of "very heavy rainfall" for the next two days in several parts of the state.

In Patna, where the weather office has predicted heavy rain till September 30, the district administration has ordered closure of all schools till Tuesday.

Six deaths were reported from Rajasthan and Madhya Pradesh while one person died in Jammu and Kashmir in the last two days in rain-related incidents.

Three students were killed in Rajasthan's Udaipur when a wall collapsed at Government Middle School, Thobwara, after the state-run school was waterlogged on Friday night.