For the grand welcome, the BJP city unit has mobilise its workers in large numbers from across the Delhi. 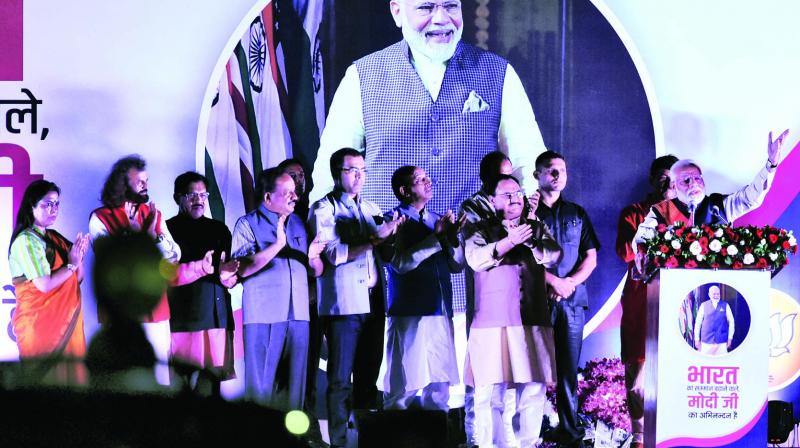 New Delhi: Thousands of Delhi BJP workers and leaders on Saturday gave a rousing welcome to the Prime Minister Narendra Modi on his return from the United States at Palam Airport.

Addressing the gathering at airport, Mr Modi said “I am thankful that so many of you are here and through you I want to bow down to the people of the 130 crore Indians. In 2014 too, after winning the elections went to the UN in the US. And have now gone in 2019. I have felt the difference, the honour of the country has increased in the eyes of the international community as well as the leaders of foreign nations. The credit goes to the people who have helped form a strong and stable government again. The Indian diaspora across the world in the countries where they live, have also received the warmth due to them.” For the grand welcome, the BJP city unit has mobilise its workers in large numbers from across the Delhi. BJP workers are seen standing along the routes from Palam Airport to the Prime Minister’s official residence at 7 Lok Kalyan Marg to greet him. BJP workers belonging to different ethnic groups and communities are present in their traditional attires and also carried their traditional musical instruments to welcome Mr Modi.

The PM’s US visit included multi-lateral engagements, interaction with the business community, bilateral meetings and also an address to the Indian diaspora at the ‘Howdy, Modi’ event in Houston, Texas. Mr Modi also addressed the UN general Assembly.

“Prime Minister Modi has given to the world an incredibly significant message bouquet — his speech at UNGA brings to fore incredible advances made by India,” said former Delhi BJP general secretary Ashish Sood.