Currently, BJP has 105 members supported by an Independent, while the Congress and JD(S) have 66 and 35 MLAs, respectively. 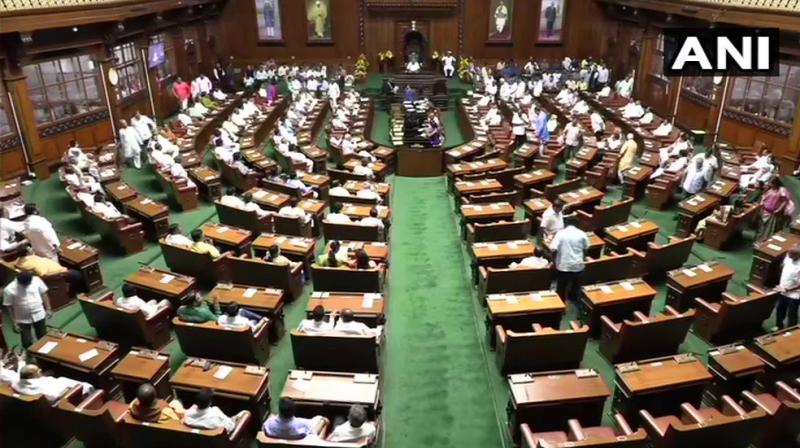 Bengaluru: The Karnataka government headed by newly sworn-in Chief Minister B S Yediyurappa on Monday sailed through the confidence motion that was held through a voice vote in the state Assembly here.

Moving the trust vote the chief minister promised not to indulge in vindictive politics and said he believes in "forget and forgive."

"I love people who oppose me as well. I want to thank Narendra Modi, Amit Shah and JP Nadda for giving me the opportunity," Yediyurappa added.

Opposing the confidence motion, senior Congress leader Siddaramaiah fired a fresh salvo at the BJP, alleging that the ruling dispensation cannot provide a stable government in the state.

"We hope you (B S Yediyurappa) will be the chief minister but there is no guarantee of that. You are with the rebels, can you give a stable government? It's impossible! I oppose this confidence motion because the reason is this government is unconstitutional and immoral," he said.

"Unfortunately, Yediyurappa has never been CM with people's mandate. Where's the mandate? You didn't have it in 2008, 2018 or even now. When he took oath, there were 222 MLAs in House, where did BJP have 112 MLAs for majority? They had 105 seats. That is not mandate," the former chief minister remarked.

The chief minister, however, accused the previous Congress-JD(S) government of bringing the administration to a standstill.

Siddaramaiah denied the accusation and said that the coalition government had worked together to bring the common minimum programme in force.

"We are elected to work for the people and we must try to do that. I attempted this as the Chief Minister and so did HD Kumaraswamy. Yediyurappa said that administration has come to a standstill and he wants to rectify that. It was not the case. In coalition, we worked towards bringing to force common minimum programme," he said.

He announced to give two instalments of Rs 2000 to beneficiaries under the Pradhan Mantri Kisan scheme and appealed to the Opposition to work together.

"There is drought (in the state). I want to address farmers' issues. I have decided to give 2 instalments of Rs 2000 to beneficiaries under Pradhan Mantri Kisan scheme from the state's side. I appeal to the opposition that we must work together. I appeal to the House to unanimously express confidence in me," Yediyurappa said.

H D Kumaraswamy in that context also said, “Power is not permanent, even for Narendra Modi and JP Nadda. We will not try to bring down your number from 105 to either 100 or lower. You speak of drought, at least now let's see how you will work. We will cooperate with you for the sake of people.”

Highlighting the development works done by the 14-month old coalition, Siddaramaiah welcomed Yediyurappa's assurance that he would work for the people.

"We discussed HD Kumaraswamy's confidence motion over the last four days. I too participated in that and I do not wish to speak about it. I could have spoken about circumstances under which Yediyurappa became the Chief Minister. I wish him well and welcome his assurance that he will work for the people," he said.

Yediyurappa was sworn-in as the 25th chief minister of Karnataka on July 26, following the collapse of the Congress-JD(S) government after it lost the trust vote.

Currently, there are 105 BJP members supported by an Independent. Both Congress and JD(S) have 100 members in the 225-member House. The majority mark stands at 104, after 17 MLAs were disqualified by Speaker KR Ramesh Kumar under the anti-defection law.