Pak’s behaviour disgusting; will expose them: Sushma on Jadhav-kin meet

Sushma Swaraj said Jadhav in the meeting, first inquired of his father's health as he saw no mangalsutra on her. 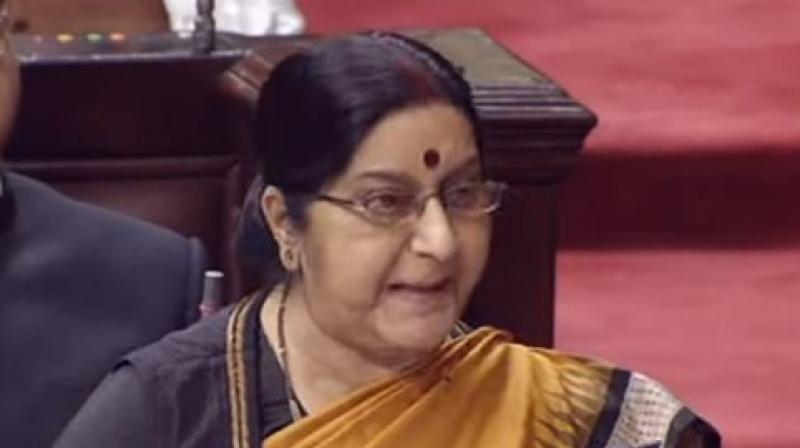 Addressing the Rajya Sabha, Sushma Swaraj said, 'The family wished to meet Jadhav and we arranged for it. Even Pakistan agreed for it this month. This could have been a step forward for both countries, but that wasn't to be.' (Photo: ANI | Twitter)

New Delhi: External Affairs Minister Sushma Swaraj on Thursday gave a detailed statement about Indian national Kulbhushan Jadhav's wife and mother visiting him in Pakistan and the way they were treated there.

Addressing the Rajya Sabha, Sushma Swaraj said "The family wished to meet Jadhav and we arranged for it. Even Pakistan agreed for it this month. This could have been a step forward for both countries, but that wasn't to be."

Not just his wife’s but also Jadhav’s mother’s bindi and mangalsutra were made to remove. When I spoke to her, his mother told me that as soon as she reached, Kulbhushan asked her 'Baba kaise hain?' (How is papa) because he saw no mangalsutra on his mother. Jadhav thought some mishap might have taken place in his absence, the External Affairs Minister said.

Sushma Swaraj said the Jadhav's mother was not allowed to speak in Marathi. She said two Pakistani officials were present in the meeting and kept stopping her repeatedly but when she continued, the intercom was switched off.

About the incident of Jadhav’s wife’s shoes being removed for “security reasons” before the meeting in Pakistan, Sushma Swaraj said, “Even after her repeated attempts, the shoes of Kulbhushan Jadhav's wife were not returned. We had warned of something like this... Pakistan's behaviour has been beyond absurd... sometimes they claim a microchip, sometimes a recorder, and sometimes a camera... What about the Emirates flight they took? These were the shoes they wore during their travel... If that had been the case, they would have been detected at security check before they boarded the Emirates flight.”

Sushma Swaraj said that the treatment to Jadhav’s wife and mother was nothing like a humanitarian gesture. “Human rights of the family members were violated again and again and an environment of fear was created for them,” she said.

"Both Kubhushan Jadhav's mother and wife were presented as widows in front of him. The manner in which the meeting was organised was appalling... their clothes, shoes, bangles, and even their mangalsutras were taken away," she further added.

Sushma Swaraj said that Jadhav's mother who only wears a saree was forced to wear salwar-kurta.

Sushma ended her address saying, “We condemn such shameful behavior by Pakistan and will not take it silently. We will expose Pakistan's utterly disgusting behaviour."

All parties endorsed the statement and are in complete agreement with External Affairs Minister Sushma Swaraj regarding the manner in which Pakistan treated Indian national Kulbhushan Jadhav's wife and mother during their visit to Pakistan.