Let us vote out a government has subverted the bureaucracy, politicised the defence services and changed statistical models to suit itself. 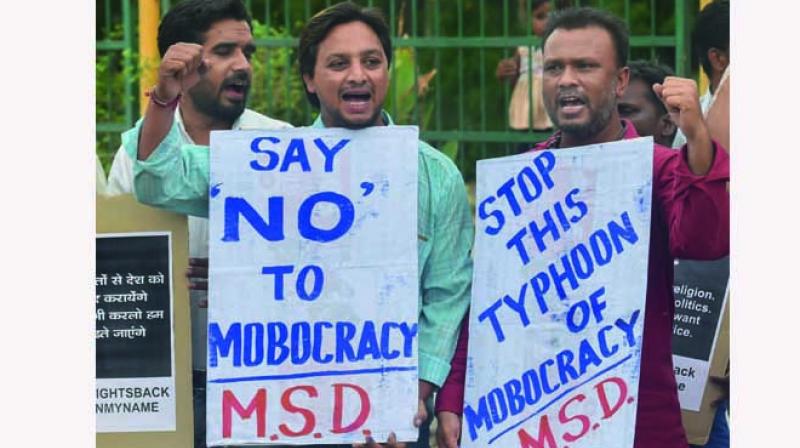 People in Ahmedabad raise slogans against the lynching of fellow citizens (Photo: PTI)

That we live in times of great polarities is an understatement. In the last five years, I have seen friends turning to foes, and childhood associations going down the drain. Suddenly friendship comes with a tag, my “Muslim” friends, my “Christian” friends, my “Hindu” friends. There was a time when friends were just that and their religious faiths and beliefs were just incidental, never pivotal to the relationship. However, with the growing pressure on society to divide itself into narrow sectarian compartments, there is not a drawing room gathering that is safe from a discourse that causes discomfort among old friends who find themselves on either side of the fence, with little or no tools to build bridges of communication in these times of right-wing fundamentalism.

On a more public level, social media used to be a space that was relatively liberating for women, however, now with the presence of social media trolls there is rampant misogyny, where I have seen women becoming the target of the vilest of abuses, open threats of rape and intimidation to anyone who chooses to speak out against the prevailing hatred and divisiveness with no consequences against the perpetrators of this hate speech. I would like to bring in this important factoid that we all seem to have forgotten — hate speech and incitement to terrorism (whether Hindu or Muslim) are not protected forms of free expression. Yet it is sad to see even Mark Zuckerberg admitting that Facebook is in charge of content on the platform but detecting hate speech remains a reactive process and users need to flag it before it can be deleted.

The secular fabric of our country is under serious duress and one of the repercussions of this is being felt in the way in which the scientific temperament is being increasingly displaced by Hindu supremacist mythical tales that were best confined to Amar Chitra Katha stories that we read as children. While it is wonderful to have these stories told to us as children, they cannot become the basis on which a country is run, they cannot become part of our history books or constitute scientific knowledge.

The misuse of mythology has emboldened the mobocracy which has taken it upon itself to randomly lynch people based on their caste, religion or gender or on the basis of what they eat. Cow vigilantism needs no evidence for apprehending the so-called “guilty”. I have seen in the last five years an escalation of the senseless killing of innocent farmers and those practising animal husbandry by these so-called vigilantes who are armed with iron rods and even guns.

I have seen the divisive lines in society getting thicker and more distinct. I am not saying that the fault-lines did not exist in the past. But in the last five years these fault-lines have been tactically exploited and matters brought to a point where we, Indians, are almost sitting on a social time bomb which might explode at any time. And yes, this happened in the last five years. We have rapidly moved away from a Liberal, Progressive and Secular idea of India to a rabid, hate-filled, communal society. We have gone in the exact opposite direction of what dreamt of by those who fought for the freedom that we enjoy today.

Let us redefine patriotism not as hating the other but as preserving friendship with the other. In fact, let there be no othering since we are all one nation. I remember the words of Prime Minister Indira Gandhi, in a speech that she made just before she was assassinated in 1984. It comes to mind with strength and irony at a time like this, and I quote, “… if we continue to quarrel among ourselves, if we tolerate communalism and do not fight against it, if we let casteism or regionalism develop and grow or if we start quarrelling in the name of language, how will we be able to preserve the unity of India? If unity is not preserved, how will we protect our independence? Do not think that if we have won freedom once, we will be able to preserve it for all time to come? Eternal vigilance is the price of freedom.” I still believe that majority of Indians want a harmonious unified India. It is just that the loud-mouthed minority of hate-mongers manage to outshout the silent majority of peace lovers.

Let us vote out a government has subverted the bureaucracy, politicised the defence services and changed statistical models to suit itself. This regime has undermined institutions, subverted separation of powers and used executive power arbitrarily for sectarian and corrupt purposes. This government has used the CBI against political opponents, meddling in its functioning — including subverting its internal structure with the help of hand-picked officials is one of its infamous deeds. The Modi-led government has diminished the legislative authority of parliament, hidden information from parliamentary committees, and used parliament as a platform for political abuse. I am not even into the economic setbacks that this government has cost us, because I feel I have written enough about it, but just on the basis of the facts and figures, it is no secret that this government has failed to prove its worth on an economic level, and has instead taken the country several years back to the dark ages of communal hatred and divided is polity.

In April, we get a chance to set things right, if we want to. This might, perhaps, be the last chance to bring some sort of civility back to society and to pull India back on the track towards achieving a harmonious society that most of us want. The political PR campaigns have ended; the ball is now in our court. The future of India is in the hands of the voters now. So please don’t miss this chance. Vote against hate-mongering. Vote against communal politics. Vote against abusive leaders and their cohorts. Vote for humanity. Vote for unity. Vote for India.