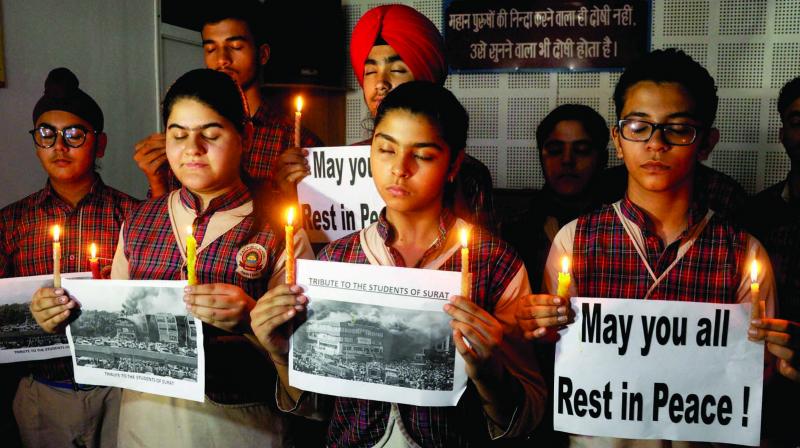 Students hold placards and candles in Amritsar on Saturday as they pay tribute to victims of the Surat fire tragedy. (Photo: PTI)

Ahmedabad: Public anger is growing against the city administration and fire brigade officials after the Friday’s tragedy that claimed the lives of 22 persons in Surat. Mr Dipak Panchani, father of Happy Panchani who died in the fire, has rejected the Rs 4 lakh aid announced by the state government to the families of victims.

Instead, he offered another Rs 4 lakh to the fire brigade to purchase equipment. “What will I do with this amount? I do not want it. I am ready to give four lakh so that the fire brigade can buy modern equipment and save lives in the future,” Mr Panchani said.

Although the fire brigade reached the spot in time, they had to wait for the hydraulic platform to rescue students. The municipal commissioner has suspended two fire officers for negligence.

On Sunday, Congress leader Hardik Patel had to face the anger of the public when he visited victims’ families. Looking at the public outrage, the Gujarat BJP cancelled its plan to give a rousing welcome to Prime Minister Narendra Modi and party president Amit Shah at the airport on Sunday evening.

Addressing mediapersons, Gujarat chief secretary Mr J.N. Singh stated that 713 teams of officials were checking buildings across the state for adherence to fire safety norms. The owners of 9,395 buildings had been given showcause notices so far.