India   All India  26 Nov 2018  In politics nothing happens by accident, and both KCR and PM Modi will learn it the hard way
India, All India

In politics nothing happens by accident, and both KCR and PM Modi will learn it the hard way

KCR has created this halo of invincibility around him belittling opponents who had made similar contributions to Telangana’s creation. 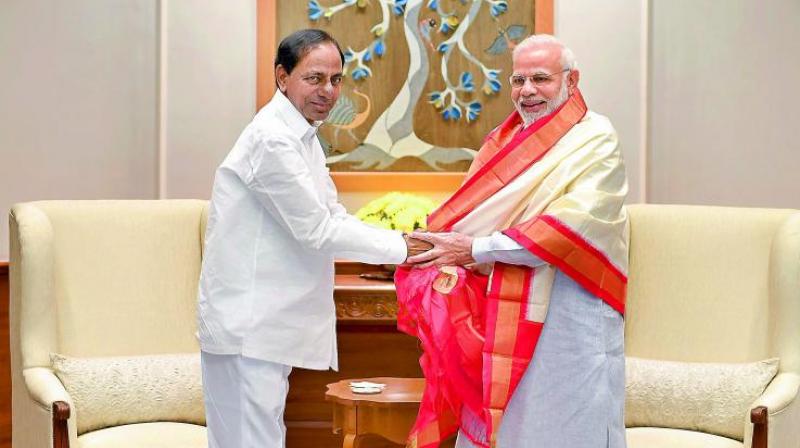 On December 7, Telangana, the youngest of the 29 states in India, will vote in its first-ever independent Assembly elections which is turning into a high-pitched battle between alliances led by the Telangana Rashtriya Samiti (TRS) and the Congress. Riding high on the popularity of some of his pro-poor schemes and his larger than life image, the TRS leader and former chief minister Kalvakuntla Chandrashekar Rao, better known as KCR, dissolved the state Assembly one year before the elections were to be held.

The wily politician took the carefully thought-out decision to outmanoeuvre the Congress believing that an early election will help him tide over the anti-incumbency against his government at the state and the BJP at the Centre. Moreover, his larger-than-life image, as promulgated by the TRS government, deceived the chief minister into taking a decision that is now beginning to hurt his party’s prospects.

KCR had always been at the forefront of championing the cause of a separate statehood for Telangana and took most of the credit when the Congress-led UPA bifurcated Andhra into two states. He has created this halo of invincibility around him belittling opponents who had made similar contributions to Telangana’s creation.

The chief minister started to believe that he is Telangana and Telangana is his. Since every government institution was under his patronage, he continued to spread this cannard which is eventually leading to his drop in popularity. Ever since the dissolution of the Assembly, multiple surveys are now predicting how the Congress-led alliance in the state is closing in on the TRS with some even predicting a win for the Opposition.

In fact, a survey conducted by the Prof G.V. Sudhakar Rao Foundation, in May 2018, had predicted a hung Assembly for the state if the polls were held then. According to the survey, the TRS and Congress were in for a close contest with former holding a narrow edge over its political rivals. Out of the 119 seats, the survey claimed that both the TRS and Congress were getting 30 per cent vote share with rest being shared by the Telugu Desam Party, BJP, among others.

However, much water has flown under the bridge since then with the Congress and its allies faring much better than anticipated earlier. In its latest analytical survey done by this foundation in the last week of October indicates clearly that the Congress lead Mahakutami that includes TDP, TJS and CPI were not only giving the TRS a stong challenge, but seems ahead in the race to wrest power from KCR.

So, what brought about this change considering everything was hunky dory for the TRS before the dissolution of the Assembly? The answer lies in how certain leaders believe that their popularity alone not is enough to win the state.

While it cannot be denied that their success can bring them laurels once but to expect it to happen time and again is a political mistake. History teaches us that such popular faces had to bite the dust when people ignored their towering personalities and voted against such hero worshipping.

Whether it was Indira Gandhi who lost the 1977 elections or the Congress led by Rajiv Gandhi losing the 1989 election or Atal Behari Vajpayee in 2004, history has several such instances where powerful faces had to face people’s ire. KCR is learning that now.

What also helped KCR in building this larger than life image was his iron hand controlling the state machinery that succumbed to him in order to feed his ego. He continued to believe their narrative of how popular he was and how several of his schemes are bringing substantive change in the lives of the people on the ground. But the reality was a far cry which has come to fore with election dates inching closer.

What has transpired since the dissolution of the Assembly is the fact that the state moved out of KCR’s control and independent voices gained ground. People who felt intimidated by the government were now speaking out freely. The anti-incumbency that was till now being swept under the carpet is beginning to spread like wildfire fuelled by the unrealistic expectations set by the state government.

What the dissolution also did was that it helped bring the entire spectrum of Opposition together considering these individuals were no longer worried about the political witch hunt that could have been unleashed by the incumbent government. Also KCR kept hankering on how there is no alternative to him which is being perceived as signs of arrogance amongst the voters who now seem inclined to vote for change. For them this election is not about a popular face, it is about development that has remained elusive.

The Telangana experiment could also be an eyeopener for those watching national politics closely where one person holds prominence over all the other issues plaguing this nation. Like KCR, Prime Minister Narendra Modi too has built this halo of invincibility and arrogance around him which is slowly taking its toll on the BJP’s prospects in 2019.

The NDA government led by Mr Modi has been at loggerheads with institutions across the country. Be it judiciary, the CBI, CVC, RBI, among several others, the Modi government has declared an all-out war against those disagreeing with its viewpoint, including Opposition leaders who are constantly being threatened by punitive action. This has led to many of them jumping ship and joining the BJP as it happened in Telangana where after winning 63 seats, KCR poached 27 more legislators taking the party’s tally to 90.

However, just before the elections, several top leaders of the TRS have joined the Congress, providing a rude jolt to KCR. There is no denying that a similar trend could be witnessed before the 2019 elections when these institutions or politicians would be under no such threat to express their displeasure with Mr Modi or BJP president Amit Shah.

Mr Modi’s popularity is on a slide which clearly reflected in the recent victories for the Congress and allies in the bypolls in Karnataka. Even in states that are going to polls, the Congress looks poised to give the BJP a tough fight. There is a growing sense of disenchantment amongst the masses and questions are being raised over rising unemployment, farm distress, sluggish growth, social harmony, among other parameters that are true indicators of a government’s policies.

In these circumstances, to all those who feel that Mr Modi alone can make the BJP win in 2019 need to think again and look at the Telangana experiment where KCR despite his towering personality is constantly losing ground. In politics nothing happens by accident, which Mr Modi and Company will learn the hard way.

G.V. Anshuman Rao is associated with the Indian National Congress and is a former chairman of the Andhra Pradesh Electronics Corporation. Mahitha Lingala is at the Jindal Global Law School.