Safia’s repeated attempts to see her ailing father Farooq Abdullah were stymied by the security officials. 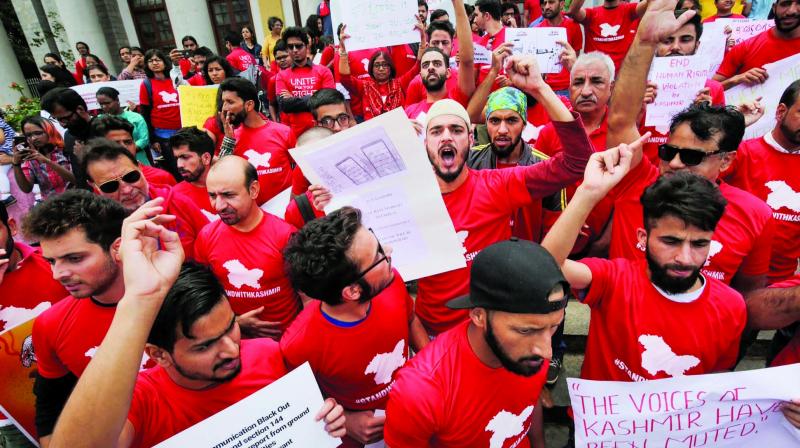 Kashmiris living in the city during a protest against the blockade of communication in Kashmir, in Bengaluru, on Saturday. (Photo: PTI)

Srinagar: With a bag containing insulin vials and a separate pack of needles and lancets Fareeda Begum arrived at the office of a senior government official earlier this week and requested him that these be delivered to her husband Muhammad Sayeed Akhnoon.

“He is suffering from chronic diabetes and needs to inject insulin thrice a day,” she pleaded.

Akhoon, a former National Conference (NC) MLA, is among several hundred mainstream political leaders and activists detained by the police earlier this month amid furore over abrogation of the special status for Jammu and Kashmir under Article 370 of the Indian Constitution and splitting the state into two Union Territories.

Ms Fareeda informed the official that at the time of being taken into custody, from his home in Srinagar’s Zakura area,  police officials allowed Akhoon to take essential medicines and a pack of insulin cartridges, pump with him. “He must have exhausted them by now”, she beseeched. “I’m sorry. I can’t help. There is nothing (left) in our hands,” the official told her.

Dejected on hearing this, she asked the official if his senior, deputy commissioner of Srinagar Shahid Chaudhary could help.

“I doubt,” came the reply from the official, leaving Ms Fareeda disheartened.

She said that Akhoon’s brother Muhammad Aslam had tried to meet him in the detention centre, but was turned away by the security officials.

Incidentally, Akhoon is among a few mainstream politicians who chose to stay put when others including senior leaders of his own party fled the Valley following the outbreak of insurgency in 1989-90.

Merajuddin Bhat was also seen moving from floor to floor and room to room in the same administrative complex, desperately looking for someone who could play “messiah” for him.

All he wanted was a “mulaqat” (meeting) with his father Nizamuddin Bhat, a former People’s Democratic Party (PDP) lawmaker, who is among more than fifty key faces of mainstream camp lodged in a makeshift prison within Sher-i-Kashmir International Convention Complex (SKICC) on the banks of Srinagar’s famed Dal Lake.

Junior Bhat said that he visited the place a couple of times but was not allowed to meet his father.

“Is my father a criminal?”, he asked.

He informed that daughter of another senior PDP leader and former minister Naeem Akhtar, too, was denied audience with her father even after being made to wait outside SKICC for more than three hours.

Safia is not being allowed to meet her father Farooq Abdullah who has been placed under house arrest at his Gupkar Road residence. She lives next door and, as claimed by a family friend, her repeated attempts to see her ailing father over past three weeks were stymied by the security officials.

She can, however, be seen walking towards her father in a video footage as he (Abdullah) almost broke down in course of an interview that he gave to a new channel in the first week of August, contradicting home minister Amit Shah’s statement on the floor of Parliament that he (Abdullah) had not been placed under house arrest but was doing “moaj masti” at his home.

Abdullah is a three-time chief minister and sitting MP, representing Srinagar Lok Sabha constituency. He is also president of NC, the J&K’s oldest political party which became instrumental in the state’s accession to India in 1947.

During a visit to Gupkar Road on Saturday, this correspondent found that the entrance to Abdullah’s hillside bungalow continues to be blocked by a police vehicle and iron barricades.

Same was the scene a few hundred yards away at the official residence of PDP president Mehbooba Mufti. She along with another former chief minister Omar Abdullah are reportedly lodged in nearby Hari Niwas government guesthouse.

Mufti’s daughter Iltija had in an open letter written to the Union home minister on August 15 asked him to explain the urgency of placing her (Iltija) under house arrest “desp-ite being a law abiding citizen” and “turning away guests who desire to meet me”. She had also said that she feared for her life after she spoke to media questioning the arrest of her mother earlier.

The common people of the Valley hold dissimilar views on the plight of the mainstream leaders and their kin. Some of them see in it deliverance of ‘natural justice’. “When in power, these people treated Kashmiris very badly. What goes around comes around,” said Abdur Rashid Najar, a Srinagar resident.

The very laws which they unleashed on their political opponents are now being used against them. Khuda kay ghar mein der hai, andher nahi,” said Abdur Rashid Najar, a Srinagar resident.

The letter copies of which were smuggled out of Mufti’s besieged house and distributed among the media persons here read, “We Kashmiris are reeling in despair since the unilateral abrogation of Article 370 on August 5, 2019. My mother Ms Mehbooba Mufti, former CM J&K, was detained along with scores of other elected representatives the very same day. It has now been over ten long agonising days since this crippling curfew was imposed”. It alleged that the people of Kashmir “have been caged like animals and deprived of basic human rights.”

The common people of the Valley hold dissimilar views on the plight of the mainstream leaders and their kin. Some of them see in it deliverance of ‘natural justice’. “When in power, these people treated Kashmiris very badly. What goes around comes around. The very laws which they unleashed on their political opponents are now being used against them. Khuda kay ghar mein der hai, andher nahi,” said Abdur Rashid Najar, a Srinagar resident.

But for many others it is “tragedy” which has befallen J&K. “It is misfortune that the very people who went against the tide and stood for India in thick and thin are being treated such badly,” said well-know Valley entrepreneur Bashir Ahmed Shah.

Meanwhile, a senior official here said the detainees who have health issues are being provided necessary medical assistance by the concerned authorities. “They are being seen by doctors regularly or as and when required and provided with medicines and other necessary support as per their (doctors’) advice,” he said. He further said that the concerned authorities have been asked to facilitate the detainees’ meetings with their immediate family members “in appropriate manner” and “as permissible under law”.