PM Modi pays tribute to Jaitley, says I cannot believe I am sitting so far and my friend is gone. 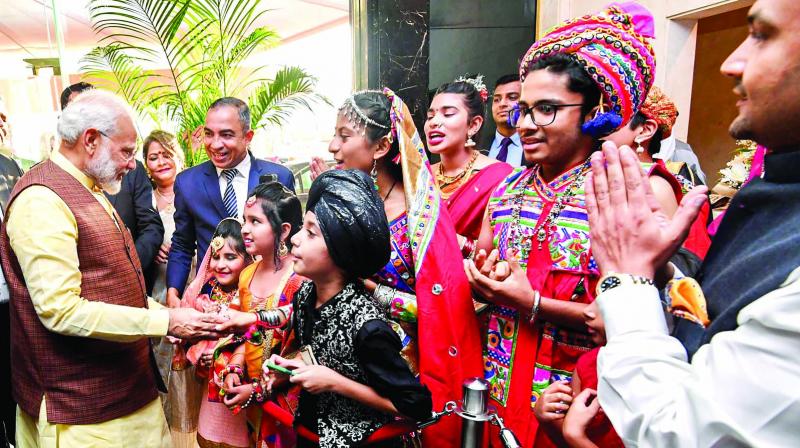 Prime Minister Narendra Modi being enthusiastically welcomed by the Indian community in Manama in Bahrain on Saturday. (Photo: PTI)

New Delhi: Prime Minister Narendra Modi on Saturday said in Bahrain that nations are not made only by frontiers and borders but by its citizens whose heads are held high.

Addressing a huge gathering of the Indian community in Bahrain late on Saturday evening that applauded him with enthusiasm and chanted his name, PM Modi said, “It seems god has kept many things for me to do”, adding that there was “unity in diversity” in India. The comment is being seen as significant, given New Delhi’s recent move to bifurcate J&K state and revoke Article 370. But one of the highlights of the speech was the moving tribute PM Modi paid to former finance minister and senior BJP leader Arun Jaitley who passed away on Saturday. “I cannot believe I am sitting so far and my friend is gone,” he said. PM Modi is in the midst of a foreign tour and pointed out that he was “bound by his duty”, a veiled reference perhaps on why he did not cut short his important tour to the two Gulf nations with which India has such close ties and where so many Indians work and stay.

“If the world looks at India with respect, it is because of you (the Indian community living abroad). ... The self-confidence of India and Indians has increased,” he said to huge applause, also pointing out the welfare measures for the people undertaken by his government. Pointing to the appreciation of the Bahrain government to the contribution of the Indian community living there, he said, “They (Bahrain) were praising you and my chest was swelling with pride.” The comment was met by a loud cheer from the audience of excited Indians. PM Modi also mentioned all the four south Indian languages in his reference to India’s rich cultural heritage.

During PM Modi’s visit to Bahrain, three pacts including one on Space collaboration were signed between the two nations. PM Modi tweeted, “Honoured to have met HH Prince Khalifa Bin Salman Al Khalifa, Prime Minister of the Kingdom of Bahrain. Our talks were comprehensive and included a wide range of subjects concerning India-Bahrain relations.” MEA officials said talks were held on the spheres of space, energy, defence, international solar alliance, maritime security and bilateraltrade. India also expressed interest in oil and shell gas reserves in the Gulf nation.

On the occasion of the festival of Janmashtami on Saturday that celebrates the birth of Lord Krishna, PM Modi is also “launching the renovation of the Shreenathji (Shree Krishna) temple in Manama” there.

Pointing to the 200 year-old Temple of Lord Krishna in Bahrain, he said it was a symbol of the rich “cultural diversity” of Bahrain.