The Congress said that there is widespread resentment against the recent actions of the BJP government. 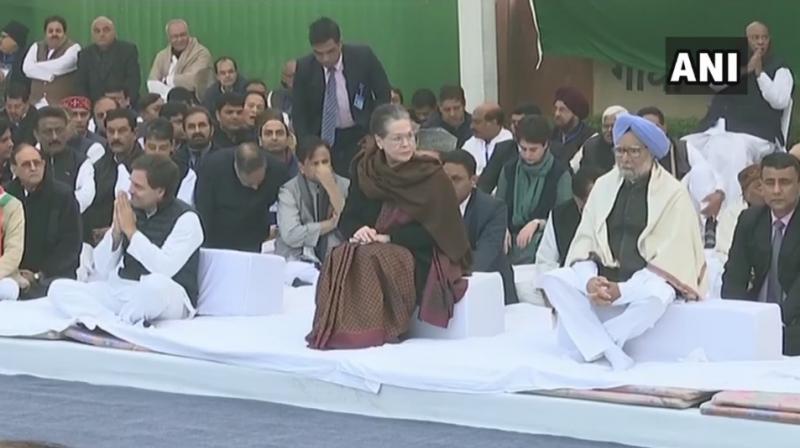 New Delhi: Top Congress leaders led by Sonia Gandhi on Monday sat on a 'Satyagraha' at Mahatma Gandhi's memorial Rajghat here, demanding that the rights of people as enshrined in the Constitution be protected.

The party held that in line with the path of non-violence shown by Mahatma Gandhi, it will fight against the "dictatorial" government and to protect the "sacred" Constitution.

The Congress said that there is widespread resentment against the recent actions of the BJP government, where people across the country, especially the youth, are demanding the restoration and maintaining the sanctity of rights guaranteed by the Constitution.

The party has also stood in support of the students protesting against the BJP government at the Centre and the use of "indiscriminate police force" against ordinary citizens in the name of maintaining law and order.

The party said that this has led to further worsening and spiralling of the situation. The Congress has said that it is committed to upholding the principles enshrined in the Constitution and fight for the continuation, maintenance and safeguard of the rights of all.

The party is up against the government for using "brute" force against "silent and peaceful" protesters across the country and for "stopping" people from holding demonstrations against the new citizenship law and the National Register of Citizens (NRC), proposed to be implemented across the country.