Opp. slammed the govt for the amendment to the Flag Code and destroying the livelihood of those who made the national flags from khadi 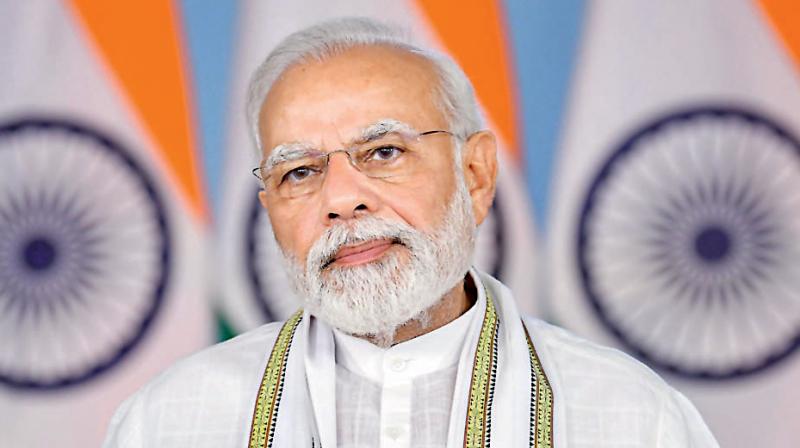 The government has envisioned the Har Ghar Tiranga (tricolour at every home) exercise in the run up to the 75th anniversary of India’s independence. (PTI Photo)

New Delhi: An appeal by Prime Minister Narendra Modi to the countrymen on Friday to hoist or display the national flag in their homes between August 13-15 to strengthen the “Har Ghar Tiranga” movement drew criticism from the Opposition, which alleged that the appeal was being made by “a campaigner for the organisation which took 52 years to hoist the national flag in Nagpur.”

The Opposition also slammed the government for the recent amendment to the Flag Code and “destroying the livelihood of those who made the national flags from khadi.” The government has envisioned the Har Ghar Tiranga (tricolour at every home) exercise in the run up to the 75th anniversary of India’s independence. In a series of tweets, the Prime Minister said that the Har Ghar Tiranga movement will deepen "our connect with the tricolour and noted that it was on July 22 in 1947 that the national flag was adopted.

"Today, we recall the monumental courage and efforts of all those who dreamt of a flag for free India when we were fighting colonial rule. We reiterate our commitment to fulfil their vision and build the India of their dreams,” said Modi, adding that this year India is marking “Azadi Ka Amrit Mahotsav”.

The PM also posted details of official communications leading to the adoption of the tricolour as the national flag. He also posted a picture of the first tricolour unfurled by India's first Prime Minister Jawaharlal Nehru.

In a similar appeal, Union home minister Amit Shah said, “With this campaign, the tricolour will be hoisted on about 20 crore houses across the country, which will work to further brighten the unbroken flame of patriotism in the minds of every citizen, especially the youth.”

Shah said people will be able to increase respect and attachment for the tricolour among the younger generation and tell them about the sacrifice of the heroes who fought for our freedom. He said the national flag not only unites every citizen but also strengthens the spirit of devotion towards the nation among the people.

The Opposition, however, cried foul. Slamming the government, Congress MP Jairam Ramesh said, "Hypocrisy Zindabad! They are destroying the livelihood of those who made the national flags from Khadi, which Nehru ji described as the uniform of India's independence. He has been a campaigner for the organisation, which took 52 years to hoist the National Flag in Nagpur."

Citing the recent amendment in the Flag Code, Congress general secretary Priyanka Gandhi Vadra tweeted in Hindi, "Modi Ji, the tricolour made of Khadi shows the self-reliance of the country and represents the livelihood of lakhs of people who are associated with it. I hope on this historic day you will listen to the Khadi flag manufacturers and take a sensitive decision on their demand."