They claimed that the self-loading rifles and INSAS were used by the cops in the firing on “innocent people”. 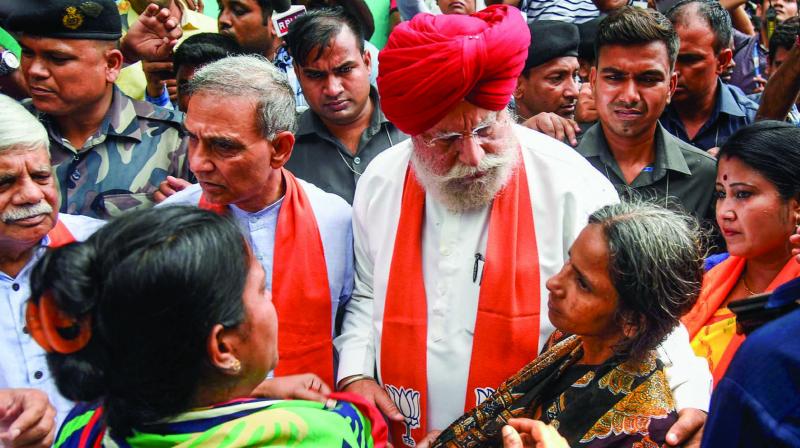 Kolkata: A three-member BJP parliamentary delegation led by S.S. Ahluwalia alleged that the police firing claimed two lives Bhatpara in North 24 Parganas two days ago after visiting the victims’ families on Saturday. They claimed that the self-loading rifles and INSAS were used by the cops in the firing on “innocent people”. Fresh violence, however, erupted after the BJP team left the area.

A BJP worker was injured during the clash between the saffron party workers and police personnel amidst prohibitory orders under Section 144 of the CrPC in force. The clash broke out after some BJP supporters pelted stones on the cops. During the day, Mr Ahluwalia, Satya Pal Singh and V.D. Ram met the families of slain: Ram Babu Shaw and Dharmveer Kumar Shaw.

Showing some pieces in his hand Mr Ahluwalia complained, “These are the bullets of SLR and INSAS. The parts of those bullets have been found. It is the police, which opened fire and killed them. The police claimed here in a press conference that they fired in the air. How could the people be hit in the firing had the police fired in the air? Were the people flying in the air?”

He added, “Seven persons suffered bullet injuries. They include a teacher, a student, shopkeepers and passers-by. Everyone was hit. The firing was done on the innocent people. Those who created trouble were lathicharged but the firing was made on the innocent. It is a matter of investigation who ordered the firing.”

The BJP MP said, “We will submit our report to Union home minister Amit Shah, also our party president. He is very much pained and worried about the incident.”

Barrackpore police commissioner Manoj Verma who led the patrol in the trouble-hit zone later asserted that the situation had been brought under control. “Situation is totally under control. It is totally peaceful. The police is patrolling the area. As Section 144 has been imposed, the police have chased away the people who had gathered at places. What we have learnt is that two persons fell down and suffered injuries,” he said.