New Delhi: Amid oft-erupting incidents of persecution of minorities in Pakistan, a fresh case of alleged harassment of the Ahmadiya community has surfaced triggering sharp responses from its civil society that wants Prime Minister Imran Khan to first improve things in his own country before talking about the rights of minorities in India.

The Sunni-dominated Islamabad Bar Association (IBA) had decided to prohibit Ahmadiyas from practicing the legal profession unless they file an affidavit swearing allegiance to Prophet Mohammad. The mandatory affidavit declaration also needs lawyers to say that they do not belong to Ahmadi community as they express their Aqidah (faith)” regarding Prophet Muhammad and say “Mirza Ghulam Ahmed Qadiani was an apostate, liar and hypocrite.”

“Majoritarian fascism is on the rise in Pakistan. You have no place to complain against India on minority rights,” wrote Neil Ahmad, who declares himself as an Ahmadi Muslim. 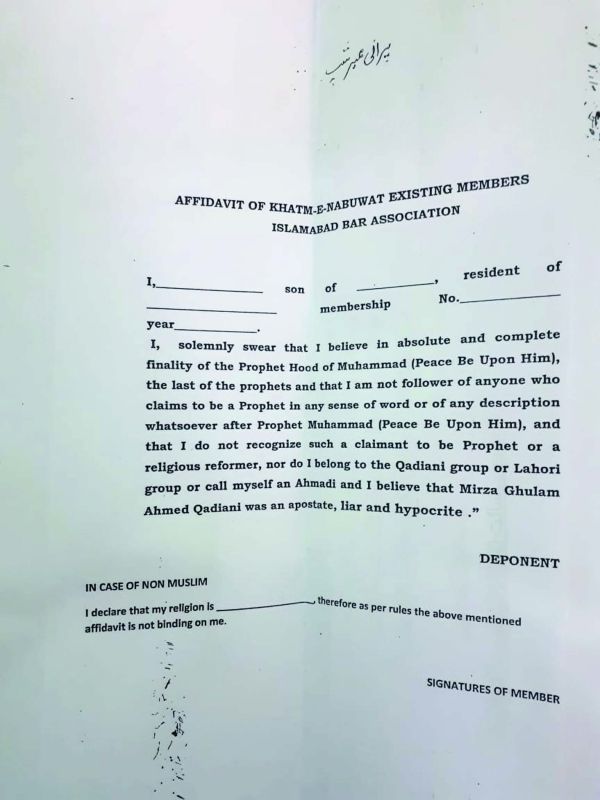 Unlike Sunnis of Pakistan, who consider Prophet Mohammad as the last messenger of God, Ahmadis claim to be Muslims in all ways, they consider Mirza Ghulam Ahmad, founder of the sect in 1889, as their messiah and believe he lived after Prophet Mohammad as the “subordinate prophet.” The Ahmadiyas have limited rights in Sunni dominated Pakistan, and even to register themselves as voters they need to either renounce their faith or accept their status as “non-Muslim.”

“We had got a resolution signed by about 400-500 bar members seeking such an affidavit. We were duty-bound to put it at the general body meeting where it was discussed and not a single member opposed it. In the end, all voted in favour of this affidavit and since GBM decision is binding on us we have decided to seek such an affidavit with one change that non-Muslims like the Sikhs, Hindus, Christians will not need to furnish such affidavit and only have to make a declaration that they are non-Muslims.

We respect non-Muslims and they can be members of our bar associations and even contest elections. As far as Ahmadis, Lahori group or Qadiani are concerned, our affidavit simply asks them to declare if you believe in Prophet Mohammad,” Mr Khokar told this newspaper. He claimed that no member of IBA has so far raised the issue of harassment or opposed this.

However, the move has generated a lot of anguish among a large section of the Pakistani society including the Ahmadis. “If they (lawyers) choose Islam, they will have to sign the declaration that they are not Ahmadis. The persecution of Ahmadiya community continues in Pakistan,” tweeted Pakistani journalist Bilal Farooqi.

Lawyer Yassif Latif Hamdani, in an article for Pakistan’s Nayadaur TV website, argued that IBA’s move violates the Constitution as it is a deliberate attempt to insult religious beliefs of the Ahmadi community. “Really what moral high ground can we take against India if we allow such blatant bigotry to prevail?” he wrote.