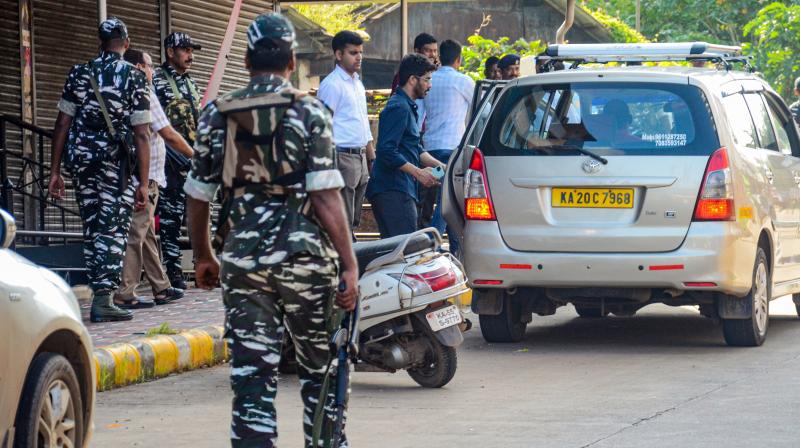 Officers of National Investigation Agency (NIA) with security personnel during raids at the offices of Popular Front of India (PFI) and Social Democratic Party of India (SDPI), in Mangaluru, Thursday (PTI)

New Delhi: In a first-ever largest action, a joint team of the National Investigation Agency (NIA), Enforcement Directorate (ED) and state police forces have arrested over 100 Popular Front of India (PFI) leaders during raids across 10 states, said sources on Thursday.

The searches are being conducted at multiple locations in the largest ever investigation process till date.

These searches are being conducted at the residential and official premises of persons involved in "funding terrorism, organising training camps and radicalising people to join proscribed organisations".

"In a major action across 10 states, NIA, ED and state police have arrested more than 100 cadres of PFI," sources told ANI.

The agency had then conducted searches at 38 locations in Telangana (23 in Nizamabad, four in Hyderabad, seven in Jagityal, two in Nirmal, one each in Adilabad and Karimnagar districts) and at two locations in Andhra Pradesh (one each in Kurnool and Nellore districts) in the case relating to Abdul Khader of Nizamabad district in Telangana and 26 other persons.

As per NIA, the accused were "organizing camps for imparting training to commit terrorist acts and to promote enmity between different groups on the basis of religion".

NIA officials conducted searches at the office of Popular Front of India and Social Democratic Party of India (SDPI) in Mangaluru and also at the houses of some of the office bearers of PFI in various parts of Dakshina Kannada during the early hours on Thursday.

Sources said that the team of NIA officials arrived at the PFI office situated at Nellikai road in Mangaluru around 3.30 am and conducted raids. PFI and SDPI offices are situated in the same building. The search continued for about 4 hours.

As soon as the news spread, PFI workers arrived at the spot and started shouting ‘Go Back NIA,’ slogans. Local police were deployed to control the situation.

City Police Chief N Shashi Kumar arrived at the spot and ensured that the situation is under control.

"I asked the NIA about the search. They did not give any proper answer," he said.