India   All India  22 Sep 2020  Two Navy women to be first pilots in combat roles, to fly from warships
India, All India

Two Navy women to be first pilots in combat roles, to fly from warships

Earlier, entry of women was restricted to the fixed wing aircraft that took off and landed ashore 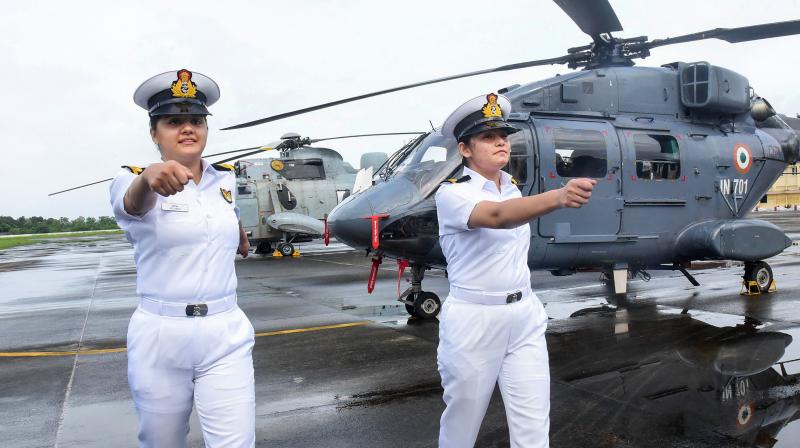 Indian women on Monday made major strides in military aviation in Navy and Air Force.

Soon, a woman fighter pilot will be flying Indian Air Force's advance fighter aircraft Rafale, said sources. She will be joining Squadron No. 17 or Golden Arrows at Ambala Air Force Station. The fighter pilot, who is reported to be already flying one of Air Force jets, is going through training for Rafale aircraft. India had earlier this month inducted 5 Rafale jets into Indian Air Force. Some more Rafale jets are expected to come next month from France.

Indian Navy said on Monday that two women officers have been selected to join as “Observers” (Airborne Tacticians) in the helicopter stream. This will make them first women airborne combatants to operate from warships.

Earlier, entry of women was restricted to the fixed wing aircraft that took off and landed ashore.

Previously some women medical officers have served for short period on warships.

These officers, Sub Lieutenant (SLt) Kumudini Tyagi and SLt Riti Singh, are a part of a group of 17 officers of the Indian Navy who were awarded “Wings” on graduating as  “Observers” at a ceremony held on Monday at INS Garuda, Kochi.

Both of them now will undergo "specialist training" for the particular helicopter on which they will be deployed.

Speaking on the occasion, Rear Admiral Antony George while complementing the graduating officers highlighted the fact that it is a landmark occasion wherein for the first-time women are going to be trained in helicopter operations which would ultimately pave way for the deployment of women in frontline warships of Indian Navy