The Brahmaputra river was flowing above danger level at three places only. 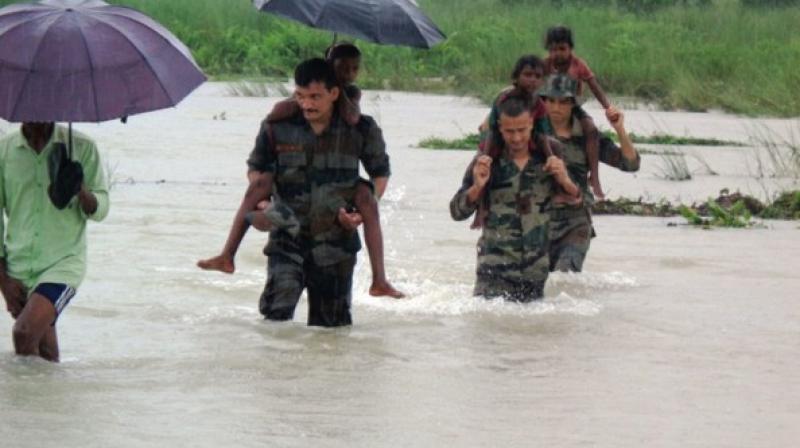 A large scale flood relief operation by the Indian Army troops is underway in flood-hit areas of lower Assam since 11 June after the torrential rain hit the region. (Photo: ANI)

Guwahati: Amidst fear of outbreak of water-borne diseases, the water level has started receding in flood-hit Assam but situation continued to remain precarious as the death toll in the rampaging floods on Saturday climbed to 65 in the state.

According to Assam State Disaster Management Authority (ASDMA), about 44,08,142 people in 3,024 villages under 77 revenue circles of 24 districts are still facing the wrath of flood.

The waters of the floods, which caused large scale devastations across the state, receded from Baksa, Hojai and Majuli districts but continued to submerge 1.51 lakh hectare of cropland and a large part of Kaziranga National Park, where 10 rhinos have died.

A defence release said that a large-scale flood relief operation was underway in flood-hit areas of lower Assam by the Army.

In Kaziranga National Park, a World Heritage site, the flood water level recorded a drop of 138 cm. The calamity has claimed the lives of 129 animals, including 10 rhinos, 62 hog deer, eight sambhar deer and an equal number of wild boar, five swamp deer, two porcupines, an elephant and a wild buffalo since July 13, a release by its divisional forest officer said on Saturday.

Meanwhile, health authorities in Upper Assam’s Dibrugarh district has expressed fear of an outbreak of epidemic. The inundation has left behind mounds of garbage and animal carcasses exposing people to serious health risks.

With drinking water sources contaminated during the flood, all the medical teams have started a water purification drive across the flood-hit areas. The hand pumps, as well as other sources of drinking water like wells, are being chlorinated and sanitized by teams of volunteers.