Many students were seen leaving the Hills in state-run buses along with tourists during the day for Siliguri. 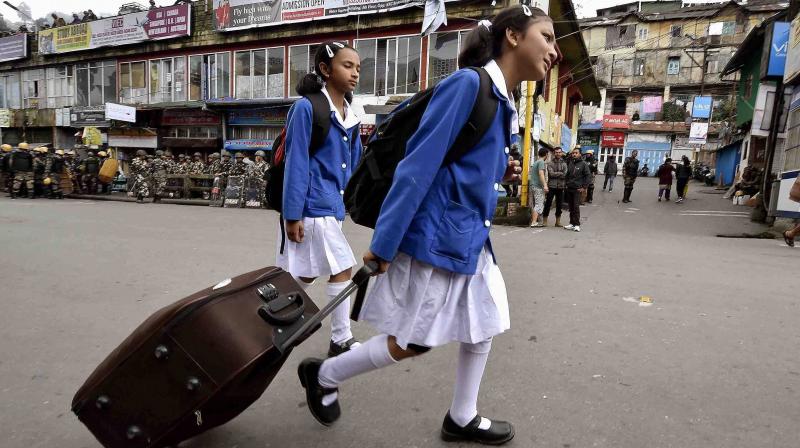 School students walk past as security personnel guarding in a street during GJM indefinite strike in Darjeeling. (Photo: PTI)

Darjeeling/Gangtok: As normal life continued to be crippled for the seventh consecutive day in Darjeeling, the Gorkha Janmukti Morcha (GJM) offered a 12-hour “window” on June 23 to schools to evacuate their students safely to Siliguri and Rongpo.

“The central committee of our party has decided to offer a 12-hour window, from 6 AM to 6 PM on June 23, to schools in the hills to evacuate their students. The students will be allowed to go to Siliguri and Rongpo only in school buses. The indefinite shutdown will continue. Only the students will be allowed to leave safely,” senior GJM leader Binay Tamang told reporters on Wednesday.

He said barring school buses, no other vehicle would be allowed to leave the hills during the 12-hour “window”.

Darjeeling is home to some of the oldest and renowned boarding schools in the country. With supplies running out and vacations starting shortly, boarding schools are facing a harrowing time.

“We are facing two problems presently. One is of the supply of food stock and another is of sending the students home,” Rabindra Subba, the principal of Himali boarding school, said.

Many students were seen leaving the Hills in state-run buses along with tourists during the day for Siliguri.

Protest marches continued amidst tight security arrangements. Army troops conducted flag marches while the Central Reserve Police Force and state police personnel have been deployed across the hills to tackle any violence by the GJM.

Internet services remain suspended to stop the spread of rumours that incite violence, and except pharmacies, all other shops, hotels and restaurants remain closed.

Violence broke out in Darjeeling after West Bengal chief minister Mamata Banerjee announced her decision to make Bengali compulsory in state-run schools. Though she said that hill districts will be exempted from the rule, the GJM began an agitation that soon turned into a revival of the demand for a separate state of Gorkhaland.

An indefinite bandh was called in Darjeeling by GJM on June 15, which, the party said, would continue till their demands are met by the Centre.

The first demand was for a separate state of Gorkhaland and the second was that the Union minister starts the process for fulfilling their demand as soon as he returns to New Delhi.

An all-party meeting convened by the GJM on Tuesday had passed a resolution that the shutdown would continue until security forces were withdrawn. The GJM, spearheading the agitation for a separate Gorkhaland, also decided to withdraw from the tripartite accord on the Gorkhaland Territorial Administration (GTA).

Sources said that the district magistrate (Darjeeling) has been directed to prepare a list of absent employees during the days of bandh and send show cause notices.

On Thursday, the state government is expected to submit a report to Calcutta high court about the damage to property due to violence and the bandh by GJM.

Sources disclosed that the amount of loss has been pegged at around Rs 150 crore.

According to a report in ANI, the strike has forced around 528 boarding students of 128-year-old St. Joseph’s School to stay on campus with many day scholars unable to attend school.