India   All India  21 Jul 2019  Standoff between UP govt, Priyanka comes to an end
India, All India

Standoff between UP govt, Priyanka comes to an end

Priyanka spent Friday night at the Chunar guesthouse, insisting she will not return to Delhi unless she meets the families of the victims. 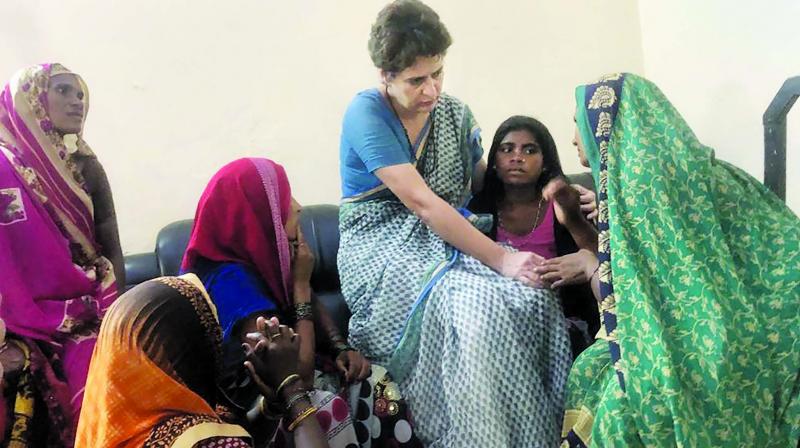 New Delhi: The standoff between Congress general secretary Priyanka Gandhi and the Uttar Pradesh government ended on Saturday, a day after she was detained by the Mirzapur administration when she insisted on travelling to the scene of a recent shootout in Sonbhadra.

The Congress alleged on Saturday that the Uttar Pradesh government was trying to protect the accused in the Sonbhadra clash instead of ensuring justice.

She spent Friday night at the Chunar guesthouse, insisting she will not return to Delhi unless she meets the families of the victims. On Saturday, twelve members of the affected families and some of the villagers from Sonbhadra, where 10 people were gunned down over a land dispute, came to the guesthouse itself.

There was drama when Priyanka Gandhi refused to furnish a personal bond. She stayed at a guesthouse in Mirzapur district, where she was taken after she squatted on the road with her supporters, insisting that she be allowed to proceed and meet the victims’ families.

Coming in support of his sister Congress leader Rahul Gandhi in a Facebook post said, “The imprisonment of Congress general secretary Priyanka Gandhi, on way to meet the families of Sonbhadra massacre victims, in Chunar guest house through the night without water and electricity by a dictatorially inclined UP government’s attempt to trample upon democrac”. The Congress will not get scared of such tactics and stop fighting for Dalits and tribals, he said.

In a series of tweets, Priyanka said Uttar Pradesh government sent ADG Varanasi Brij Bhushan, commissioner Varanasi Deepak Agarwal and DIG to tell her to return without meeting the victims.

“I have clearly stated that I have come here not to violate any law but to meet the victims,” she said.

In another tweet, she said that her advocates have told her that her detention is totally illegal. Several Congress leaders including former union ministers RPN Singh and Jitin Prasada were also stopped from going to Sonbhadra. Even a delegation of TMC Mps was detained at the Varanasi airport.