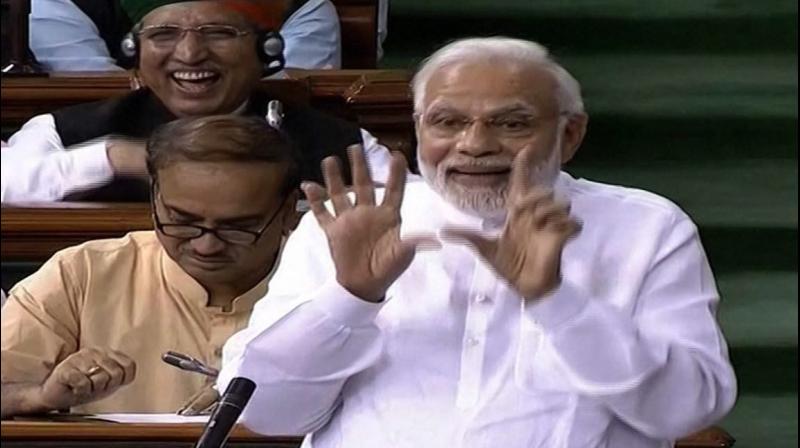 Prime Minister Narendra Modi speaks in the Lok Sabha on 'no-confidence motion' during the Monsoon Session of Parliament, in New Delhi. (Photo: AP via PTI)

New Delhi: After a marathon 12-hour debate, the Narendra Modi government has won the trust vote in the Lok Sabha by a comfortable margin on Friday evening. The debate that started at 11 in the morning ended up with a trust vote minutes after 11 pm on Friday. The session witnessed Prime Minister Narendra Modi, who was smiling when Congress president was delivering his statement, tear into the Opposition and Rahul Gandhi in his speech that last for one and a half hour.

The House, on Friday, witnessed scenes which were never seen before. After delivering a scathing speech, Congress chief Rahul Gandhi had crossed the Lok Sabha floor and hugged the Prime Minister. The PM shook Rahul Gandhi's hands but ignored his call to stand so that he could hug the BJP leader. PM Modi initially looked nonplussed and did not stand up to hug him, but recovered quickly and called Gandhi back, pulling him by his sleeves, and patted him on the back.

Late in the evening, Prime Minister Narendra Modi gave a point-by-point rebuttal to the attack. He also took on Sonia Gandhi and Andhra Pradesh Chief Minister Chandrababu Naidu, whose party TDP had moved the no-confidence motion.

Here are the top points to this big story: