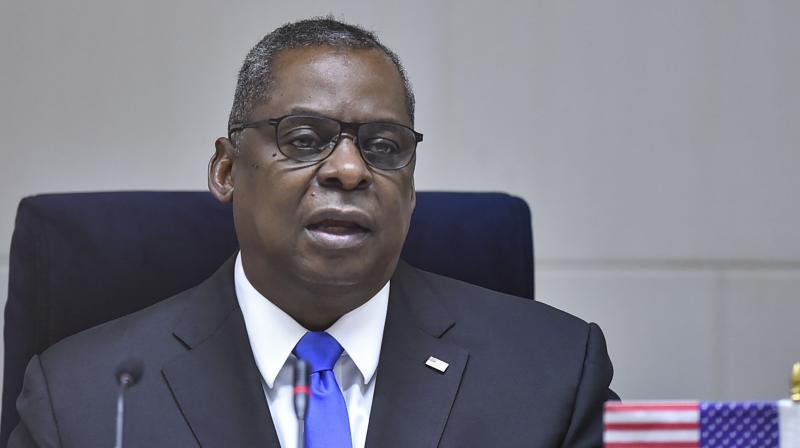 Austin said that the US reaffirmed its commitment to a comprehensive and forward-looking defence partnership with India as a central pillar of its approach to the region. (Photo: PTI)

New Delhi: US secretary of defence Lloyd James Austin said on Saturday that the United States never thought that India and China were on the threshold of war during their military stand-off in Ladakh.

He also said that he had discussed the issue of human rights of minorities in India with Cabinet ministers in the Modi government and added that "partners need to be able to have those kinds of discussions."

"We have never considered India and China were on the threshold of a war," Mr Austin said during a press conference.

To a question whether he had spoken with Prime Minister Narendra Modi about "violations of human rights especially against Muslim minorities in the Northeast", Mr Austin replied: "I did not have an opportunity to talk with him about that. I did have a conversation with other members of the Cabinet on this issue."

Mr Austin pointed out that US President Joe Biden has said that human rights and rule of law are important to the United States of America. "We always lead with our values. As a democracy that's pretty important to us. India is a democratic country and you treasure your values as well. There are a number of things that we can and will work on together," he said.

Sources said that Mr Austin on Saturday told external affairs minister (EAM) S. Jaishankar in an hour-long meeting that “as the two largest democracies in the world, human rights and values are important to us and we will lead with these values”.  Mr Jaishankar “agreed and emphasised that a strong relationship between the two democracies was not only important for both countries but for the rest of the world”, sources said.

Mr Austin said that India is an important partner amid the rapidly shifting international dynamics. "US-India relationship is a stronghold of a free and open Indo-Pacific region," he said.

Earlier, chairman of the US Senate Committee on Foreign Relations Bob Menendez had, in a letter to the US defence secretary, urged him to raise the issue of human rights and democracy with India, and also the acquisition of S400 air defence systems from Russia.

“The Indian government’s ongoing crackdown on farmers peacefully protesting new farming laws and corresponding intimidation of journalists and government critics only underscores the deteriorating situation of democracy in India," Senator Menendez had said in the letter.

Secretary Austin said that he and defence minister Rajnath Singh had a bilateral meeting during which they discussed India’s planned purchase of Russia’s S-400 air defence system. He said that US has urged all of its allies to move away from Russian equipment and avoid any kind of acquisition which can trigger sanctions(under CAATSA). He said that since there has been no delivery of S-400 systems to India the issue of sanctions was not discussed.

"We are keen to work together to realise the full potential of the India-US Comprehensive Global Strategic Partnership," Mr Singh said after the meeting. He said that both sides reviewed the wide gamut of bilateral and multilateral exercises and agreed to pursue enhanced cooperation with the US Indo-Pacific Command, Central Command and Africa Command.

"The recent Leaders’ Summit of India, USA, Japan and Australia under the Quad framework emphasized our resolve to maintain a free, open and inclusive Indo-Pacific region," added Mr Singh.

Mr Austin said that the US reaffirmed its commitment to a comprehensive and forward-looking defence partnership with India as a central pillar of its approach to the region.