India   All India  21 Feb 2021  Maneater tiger A2 from Maharashtra might be in Telangana for love
India, All India

Maneater tiger A2 from Maharashtra might be in Telangana for love

Big CAT was spotted crossing Pranahita river. It has almost turned a stretch of this river as its private swimming pool 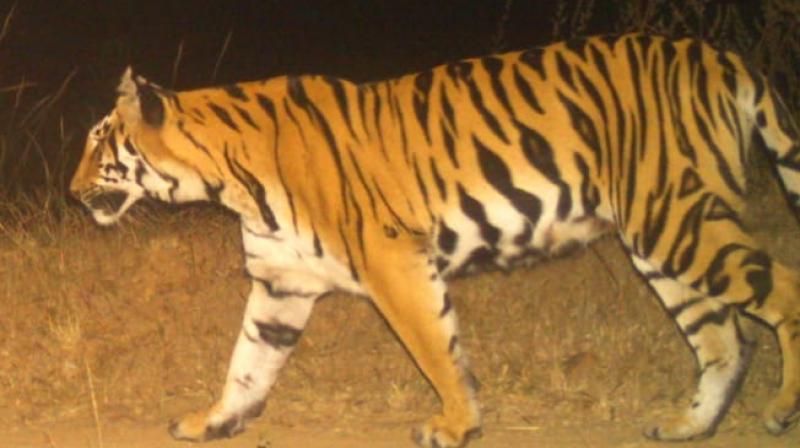 Hyderabad: A2, a wayward tiger from Maharashtra which killed two people in the Kumrum Bheem-Asifabad district in Telangana, has been trekking back and forth between the two states.

A probable reason it seems is while local male tigers of Telangana are not “being tolerant” about the outsider, it is unable to stay away because it has fallen in love with a lovely young tigress here. Most of the Telangana’s resident tigers have made Asifabad forests their homes for a long time.

A2, all the way from Maharashtra’s jungles keeps coming back, according to sources, to “try its luck” with a resident tigress in Asifabad district. “A2 is like any young man. It is exploring and chasing girls,” a source familiar with A2’s movements told Deccan Chronicle.

During its inter-state trips, A2 has demonstrated its similarity with several other tigers from Chandrapur landscape. It is used to open scrub areas, likes seeing people; he is bold and not afraid to cross roads on which lorries trundle across. This crop of tigers, having been born in a landscape where they jostle for space with people, are not particularly worried about passing by human habitations, nor are they scared of coming face to face with humans.

This makes the tiger not only unafraid of people, but even comfortable in their presence. Its naturally intrepid behaviour could make it aggressive.

Some time ago, A2 was declared responsible for the death of a 22-year-old man, Siddam Vigneshwar, near Digida village in Dahegaon mandal of Asifabad district on November 11 last year. On November 29, a 15-year-old girl, Pasula Nirmala, was killed purportedly by A2 close to Kondapalli village in Penchikalpet mandal in Asifabad.

The latest information on the tiger is it is back in Asifabad district and is moving around in Bejjur and Penchikalpet forest ranges. Two teams of five-member trackers each, are monitoring its movements closely.

“A total of around 120 officials and staff are on the job. The problem is you cannot chase a tiger to catch it. If you find it has made a kill and is feeding on it, you cannot disturb it. We have to wait for it to return to the kill again to feed on it, giving us a chance to tranquilize and catch it,” a Forest Department official told Deccan Chronicle.

A team of wildlife vets from Maharashtra, experienced in tranquilizing and capturing big cats, is on a standby and are expected to take the lead in attempts to capture A2 once its location is established, in terms of it staying put at a kill. It is hoped that such an operation could be mounted very soon. If conditions are right, it could happen in the next few days.

Before its February 15 re-appearance in Telangana, A2 reportedly was seen with a resident tigress in Asifabad district. It being with a tigress made it absolutely impractical even to attempt to tranquilize it.

“There is no point in getting excited at seeing the tiger and taking a shot at immobilizing it as it will make it even more wary. We have to be patient and let the animal feel it is not being chased. More important than managing a tiger is managing people and keeping the villagers calm and keeping them out of harm’s way so the tiger feels free to return to a kill,” a wildlife veterinarian, who has tranquilized several tigers and leopards, said.

The real challenge, he explained, lies in keeping people away from areas where the tiger might be moving and convince them not to go searching in the forest if a buffalo or cow is missing.

“The tigers from the Chandrapur area are known to kill cattle, not just one but sometimes more than one and not return to feed on them. They are tuned to human presence and activity. If they remotely suspect there are people around, tigers avoid those spots. This makes it even harder to find a location where they can be effectively cornered and tranquilized,” a department official explained.

“A2 was spotted several times in the recent past by people as it crossed Pranahita river. It has almost turned a stretch of this river as its private swimming pool,” the official said.

A district-level management and coordination committee meeting to discuss matters relating to forests in Asifabad is expected to be held in the next few days, where efforts to nab A2 will be expected to be discussed.