India   All India  20 Dec 2019  ‘US cares deeply about protecting minorities’
India, All India

‘US cares deeply about protecting minorities’ 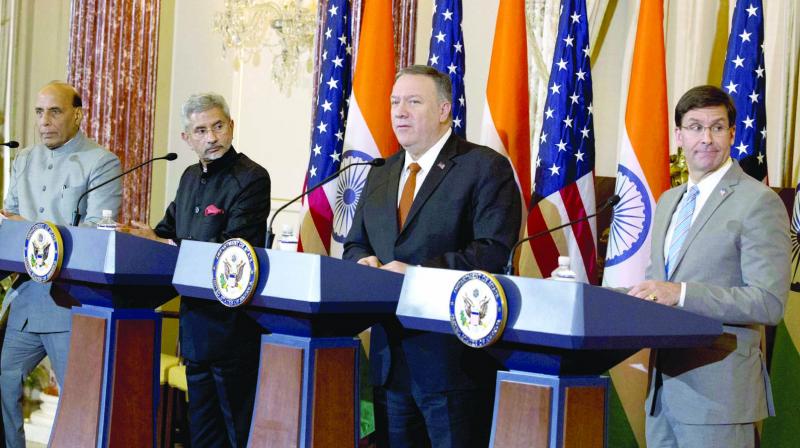 Defence minister Rajnath Singh, external affairs minister S. Jaishankar, United States secretary of state Mike Pompeo and secretary of defence Mark Esper during a press conference after a bilateral meeting between US and India at the department of state in Washington on Wednesday. (Photo: PTI)

New Delhi: In remarks that are bound to worry New Delhi soon after the Indo-US 2+2 Dialogue at the foreign and defence ministerial level in Washington, a United States state department official on Thursday said the US has been “concerned about the religious criteria” in India’s Citizenship Amendment Act (CAA)” even as US secretary of state Michael R. Pompeo said his country “cares deeply and always will about protecting minorities and religious rights everywhere”. Mr. Pompeo, however, said the US “honours Indian democracy as they have a robust debate on the issue.” In New Delhi, the ministry of External (MEA) said that while the CAA issue is India’s “internal matter” and did not figure in the 2+2 Dialogue, external affairs minister S. Jaishankar had conveyed the Indian government’s “perspective” on the CAA “with the leadership of the (US) Senate foreign relations committee”. The MEA also referred to Prime Minister Narendra Modi’s “appeal for peace, unity and brotherhood”, adding that Indian democracy and institutions “are well-equipped to deal with any differences of opinion in a peaceful manner”. Mr. Jaishankar also told reporters in the US that the CAA is “a measure which is designed to address the needs of persecuted religious minorities from certain countries”.

The dialogue was held from the US side by secretary of state Michael R. Pompeo and defence secretary Mark T. Esper and from the Indian side by external affairs minister S. Jaishankar and defence minister Rajnath Singh in Washington on Wednesday.  “This issue being an internal matter of India was not discussed per se at the 2+2 meeting. Our perspective on the Act (CAA) has been shared with the US interlocutors, including the (US) Congress Administration. We have higlighted the points, which we have articulated within the Parliament and subsequently, which has been mentioned both by the Prime Minister and home minister. In the context of the meeting with the members of the Congress, external affairs minister (EAM S. Jaishankar) shared our perspectives on this issue,” MEA spokesperson Raveesh Kumar said at his weekly briefing in New Delhi on Thursday evening. “EAM Jaishankar shared India’s perspective on Citizenship Amendment Act with the leadership of the senate foreign relations committee, among discussions on other matters of bilateral cooperation,” the MEA said.

The MEA spokesperson said, “I can refer to the Prime Minister’s appeal for peace, unity and brotherhood. Our democracy and other institutions in the country, they are well-equipped to deal with any difference of opinion in a peaceful manner. I do not think that any external agency has any locus standi to comment on the matter, which is internal.”

US secretary of state Pompeo, meanwhile, told reporters in the US, “We care deeply and always will about protecting minorities and religious rights everywhere. We honour Indian democracy as they have a robust debate on the issue that you raised.”

A US state department official said, “I think secretary Pompeo was very clear that we care deeply about the rights of minorities and of the need to protect religious freedom. It’s an integral part of our diplomacy. You see it in the reports we draft every year and the ministerial conference we held the last two years running on international religious freedom, so obviously this is a core issue for this administration and this secretary.”

The US state department official added, “ The secretary also noted that India is a vibrant democracy. There is a debate going on in India over this very legislation. It’s legislation that will be reviewed by the courts. It’s being protested by political parties. It’s being debated in the media. All of these institutions exist in a democratic India and so, we respect that process.” He further said, “We have concerns about religious criteria (in the CAA) but again this is a piece of legislation now, an Act, that is continuing to be reviewed within the Indian system.”

On his part, Mr  Jaishankar told reporters, “The question that you asked relating to India, if you had followed the debate on that particular legislation carefully, you would see that it is a measure which is designed to address the needs of persecuted religious minorities from certain countries.”

He added, “If you look at what those countries are and therefore, what their minorities are, perhaps you understand why certain religions were identified in terms of characterising those who had come across.”