To woo Bihar, Modi has litti-chokha 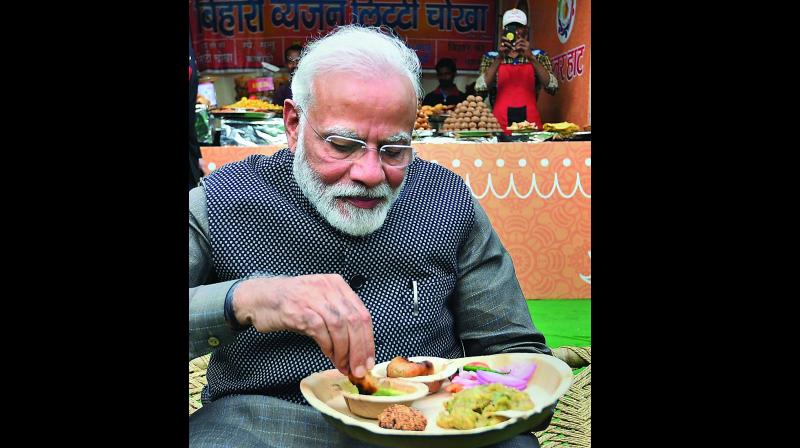 New Delhi: Prime Minister Narendra Modi on Wednesday made a surprise visit to the ongoing “Hunar Haat” at the India Gate lawns, where he interacted with some artisans and relished litti-chokha and kulhad chai. For many, Mr Modi’s choice of litti-chokha was a signal to the people of Bihar, where Assembly polls are due in October-November this year. Litti-chokha is a popular dish in Bihar, Jharkhand and parts of Uttar Pradesh. A woman artisan presented him with a map of India, highlighting each state’s cultural diversity. The Prime Minister was happy that Mahatma Gandhi and the Statue of Unity in Gujarat were also a part of the map. Over 50 per cent of the master artisans, crafts people and culinary experts at the venue were women.

The “Hunar Haat” is an initiative of the minority affairs ministry, which claims about three lakh artisans, culinary experts and crafts people have been given employment and job opportunities through this in the past three years.

Mr Modi, who spent almost an hour there, paid `120 for the litti-chokha and `40 for two cups of tea, which he had with minority affairs minister  Mukhtar Abbas Naqvi. The PM interacted with many crafts people and artisans, many of whom sought to be photographed with him. Many visitors too took selfies with the PM, who tweeted several photographs from his visit. Mr Modi also tried his hand at a muscial instrument and interacted with a divyang artist, who told him how through her work with “Hunar Haat” she was able to buy her own house. The PM also appreciated paintings made by her. “Spent a wonderful afternoon at Hunar Haat on India Gate. It showcases the best of products including handicrafts, carpets, textiles and, of course, delicious food! Do visit it... Had tasty Litti Chokha for lunch along with a hot cup of tea,” Mr Modi tweeted. This year’s “Hunar Haat” is on the theme of “Kaushal Ko Kaam”, and it will be on till Sunday, February 23.

“I got the chance to shake hands with the Prime Minister for the first time in my life. I am really happy,” said Ata-Ur-Rehman, an artisan from Mumbai.