India   All India  20 Feb 2020  The lady who shattered myths and became a sarpanch
India, All India

The lady who shattered myths and became a sarpanch

The foundation of the Panchayati Raj system in Rajasthan changed after the 73rd Constitutional Amendment. 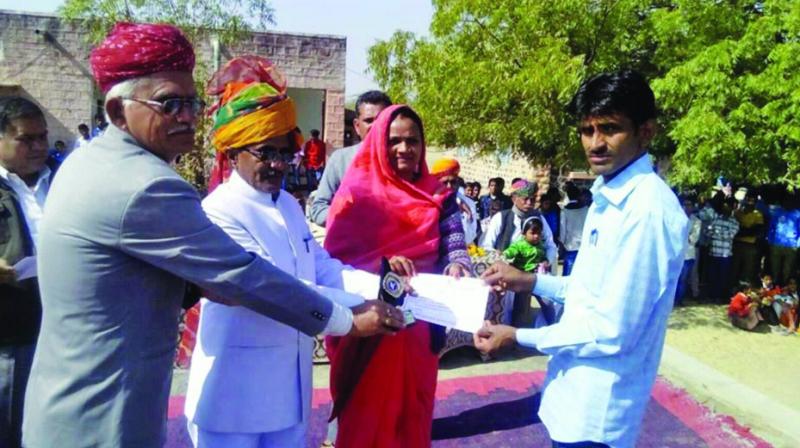 Santoshi Jeenagar, the sarpanch in the Patodi gram panchayat of Barmer district.

Santoshi Jeenagar, the sarpanch in the Patodi gram panchayat of Barmer district is taking the lead herself by overcoming obstacles: her successful work of five years is special in many ways. Dreaming of development with progressive thinking is like swimming against the tide in its own way, while reconciling the complexities of caste hierarchies, the gender-based social order and the traditional, frozen-patriarchal, feudal political and state structure at its discretion. It is also special that Santoshi Jeenagar, who belongs to the SC (Scheduled Caste), has become the sarpanch of Patodi, challenging a rival of the general class. The newly-formed Patodi panchayat samiti of Barmer district may be backward in terms of development, but the voters showed conscious thinking in choosing the eligible sarpanch in the Panchayati Raj elections this time. Bypassing the influence of wealth, political clout and the traditional social system, Santoshi Jeenagar was given command of the gram panchayat. Even after the recent state Assembly elections in Rajasthan, the Congress-led government changed the rule of the former BJP government in the eligibility for the election of sarpanch, but due to this rule, young, zealous new eligible faces are represented and they had the opportunity to represent themselves, of which Santoshi Jeenagar is also one.

Santoshi Jeenagar lives in a discriminated society where women have to face lifetime discrimination from birth, and from this system, Santoshi is also not untouched. The positive side of her family was that they worked hard to provide education to their daughters. Santoshi is from Samadadi village of Barmer district. The father used to make and sell shoes and from that money, he used to maintain his family. Equal educational opportunities were given by the parents to all four sisters and all four brothers. The in-laws also loosened some of the traditional bonds and they also continued the education of Santoshi Jeenagar. Santoshi’s parents took the initiative by providing education to their daughters at a time when society was engaged in an ideological upheaval over giving or not giving an opportunity to girls. But the family broke social barriers and taught their daughters, the result of which is the confidence of Santoshi Jeengar today and her leadership ability.

The foundation of the Panchayati Raj system in Rajasthan changed after the 73rd Constitutional Amendment. Through the reservation system, many new people came because the reservation was provided to women, scheduled castes, scheduled tribes and other backward classes. In the Patodi region too, power began to slip from the hands of those who used to write their own political fortunes. In the last Panchayati Raj elections, the rule was that the person contesting for the sarpanch’s position should be 8th pass and this rule once again led to political upheaval. This opened doors to new and young people who wanted to enter politics. Santoshi Jeenagar, who teaches in a private school, was considered eligible by all classes and was given the opportunity to become a sarpanch. For the first time in the history of Patodi, a person who belongs to the SCs became the sarpanch on the seat reserved for the general category, and now she is trying to live up to the expectations of the people of the panchayat.

Santoshi said that: “When people of all classes told me about the decision to contest the election for the post of the sarpanch, then upper-class people said that this is a seat for the general class. If you have reserved the seat for SCs, then stand for the election. I appreciated the sentiments of all the classes and replied that there is no reservation for the general class. Then I decided that I would contest elections, and I contested. All classes of people gave full support. I became a sarpanch from a teacher. Now I will try to work. I know there are obstacles, but I do not get distracted by them.”

Santoshi Jeenagar has to face many types of obstacles. Being a woman, as well as belonging to the SCs, social acceptability, irresponsible bureaucratic behaviour and absurd acts of political parties remain invisible everywhere. Santoshi says that “after winning the election some people raised the issue of fake certificate of my eighth class. But it did not hurt me. Those who raised the issue had to return empty handed. People have thousands of ways to discourage you, so have the courage to overcome them. As a citizen, I consider it appropriate to answer them through my work, especially those who have abused me for my caste”.

Counting the achievements of her tenure, Santoshi said that “to increase the private income of the panchayat, it was decided to increase the rent of 20 shops of the panchayat in the main market, but for this also she had to fight with the shopkeepers, allott land for construction of the tehsil and panchayat samiti building and try to stop and remove the encroachment. For the cleanliness of the town, cleaners were employed by the panchayat. Due to the lack of requisite cooperation in the sanitation of the village, they had to be removed. I take the initiative to provide benefits to the poor beneficiaries of the schemes run by the government for poor families. Very poor families were selected that were below the poverty line. I identify the eligible beneficiaries of widows, old aged and disabled persons and get them attached to the pension scheme. I oversee all service sites and development works. I provided computer training to 20 girls under skills training who passed class 10th. I take out the time to go to school to teach children. I see the educational level of the children and make teachers aware. On the day of Akshaya Tritiya, a writing competition was organised in the school to stop child marriage. My panchayat has been declared Open Defecation Free (ODF) and for this, the Panchayat was honoured at the district level on August 15, 2016 under the Swachhchh Bharat Abhiyan. Cleanliness and hygiene are major issues and from this many social traditions and practices are connected and that hinders development. It will take time to change them”.

She has fulfilled the development goals which she had taken up during her tenure. Promotion of girl child education, construction of playgrounds in schools, priority given to drinking water and sanitation, providing residential leases to poor families deprived of land and providing housing for them was done prominently. She says, “It is my priority to promote education and especially the education of girls, to remove the hurdles in getting education and whether I remain sarpanch or not, it will be my priority”.