The committee he announced will comprise 13 Congress MLAs owing their allegiance to him. 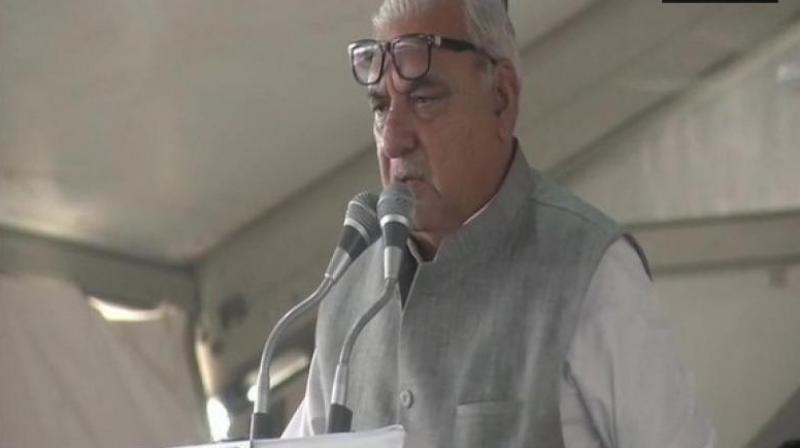 New Delhi/Chandigarh: The Congress is likely to effect changes in its Haryana unit as early as this week, yielding to the political ultimatum given by former chief minister Bhupinder Singh Hooda.

At a “Maha Privartan Rally” he addressed at the Cattle Fair Ground in Rohtak on Sunday, Mr Hooda announced a 25-member committee to decide the “future course of action” for his faction — words that appear to suggest he and his supporters could decide to break away from the party. The committee he announced will comprise 13 Congress MLAs owing their allegiance to him.

Mr Hooda fuelled rumours of a potential rift between the national and Haryana leadership of Congress when he slammed the grand old party for “losing its way” over Article 370. He lauded the BJP-led Centre’s decision to revoke Article 370, which granted special status to Jammu and Kashmir. “I was born in a patriotic family, those who oppose the abrogation of Article370, I want to tell them ‘usulon par jahan aanch aaye, vahan takrana zaruri hai, jo zinda hai to zinda dikhna zaruri hai’,” added Mr Hooda.

However, Mr Hooda was quick to add that he supported the Centre’s move because many soldiers hailing from Haryana are posted in Jammu and Kashmir. He reminded the Manohar Lal Kattar-led Haryana government that it cannot hide behind the Centre’s decision to revoke Article 370 as the state government will soon have to give an account of its regime of the last five years.

Sources told this newspaper that Mr Hooda stopped short of announcing formation a new party at his massive show of strength rally at Rohtak on Sunday after missives were sent to him that his demands for changes would be accommodated by the Congress high-command while re-organising the Haryana unit.

The formidable Jat leader has been demanding removal of Haryana Pradesh Congress chief Ashok Tanwar and had also indicated that he be declared the chief ministerial candidate for the coming Assembly polls in the state.

Mr Tanwar, a former president of the Indian Youth Congress, is seen to be an appointee of former Congress president Rahul Gandhi. With the return of Sonia Gandhi at the helm of affairs in the party, the proverbial old-guard might have its way and the concerns of senior leaders like Mr Hooda might be taken in to account, the sources said.

According to a senior Congress leader from the state, the party’s central leadership has not effected any changes before the rally as this would have given an impression that the high-command, read the Gandhis, have had to bow before Mr Hooda.

Mr Hooda also announced that should he be elected chief minister again, he would have four deputy chief ministers. It’s interesting that the stage had no posters.

Congress in Haryana is split into factions, led by besides Mr Hooda and Mr Tanwar, Randeep Singh Surjewala, Kumari Selja and Kiran Chowdhary.

However, it is the rivalry between Mr Hooda and Mr Tanwar which has embarrassed the party most with Congress general secretary in-charge of Haryana Ghulam Nabi Azad having had to walk out of a stock-taking meeting after the Lok Sabha poll debacle when supporters of both leader came to blows. Assembly polls are scheduled to be held in Haryana in September.