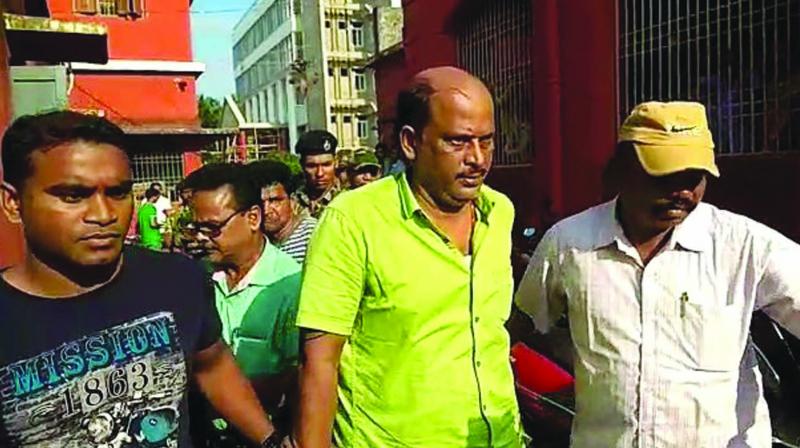 Bhubaneswar: The law and order situation in Odisha seems to be deteriorating fast with criminals executing their plans with impunity as the state government falls short of taking action to curb the growing nexus of youths with organised gangsters who are involved in extortion, tender-fixing, illegal stone and sand extraction and peddling of narcotics and contrabands.

After the death of Malik Suleiman in a gang war in 2009, Tito and Hyder, despite being in jail, continue to operate with their local recruits. Grapevine has it that the recruits, like regular employees of registered firms, receive monthly remuneration. Armed with firearms, these youths have killed have killed in the past few years more than a dozen of work-contractors and businessmen who refuse to pay extortion money.

With Paradip city coming up as a new place of brisk business activities, the gangsters have spread their network at the place. Members of these gangs, sources said, created many hurdles in the timely completion of the Haridaspur-Paradip railway line by threatening the contractors engaged in the project. These anti-social elements have also been making huge money from cargo supplies to the port by road transporters. Most of the harassed transporters keep silent fearing backlashes by the gangsters.

In Jajpur, illegal stone quarrying at several places, continuing for decades, has never been contained by the authorities. The action so far has been limited to a few raids and seizure of trucks. Big shots making hundreds of crores rupees from such illegal quarrying activities have managed to dodge the administration because of their alleged proximity to local leaders of the ruling BJD. Stone mafias have literally swallowed many hills in Jajpur.

In Khurda, the situation is no better. A few anti-socials have engaged youths on monthly remuneration in plunder to stones and peddling of contrabands. The recent arrest of notorious gangster Subhranshu Parida, alias Chhota, and subsequent investigation revealed that youths were being lured into profession by monthly remuneration varying from Rs 12,000 to Rs 20,000. Each youth joining the gang was given a pistol to hit the target.

According to the data available with the state police, Odisha had registered around 563 murders in January to May 2019. The state had recorded 1,378 murder cases in 2018. It has been observed that such cases have been on the ascent after a decline in 2016-17.

An analysis shows the crime rate of murders in 2018 and 2019 (Jan-May) remained at over 2.9. The rate was around 3 in 2016. This shows the murder crime rate has almost remained stagnant over the years.

As per National Crime Record Bureau (NCRB) 2016 report, Odisha figured at 8th in the crime rate of murders in the country and was ranked at 10th in the incidence of murder cases registered.

The nagging factor behind the rise in violent crimes has been delay in completion of preliminary inquiry (PI), filing of chargesheets and the resultant lower conviction rate.

When the total murder cases registered was 1,378 in 2018, the total PIs done in the year stood at 657 and chargesheets were filed in only 645 cases.

The scenario looks worse in 2019. As per the police data available, PIs were completed in 322 of a total of 337 murders registered during January-March 2019, but chargesheets were filed in mere 15 murder cases. The chargesheet rate has tumbled down to mere 4.45 per cent.

The conviction rate of below 25 per cent means nearly 75 accused in every 100 cases filed have got acquittals from the court of law.

Senior lawyers blame the high acquittal rate to delay in PIs and framing of chargesheets in the state.