Sena MPs being allotted seats on Oppn side: Pralhad Joshi

Shiv Sena had said on Saturday that it would not attend a meeting of NDA constituents on the eve of the winter session of Parliament. 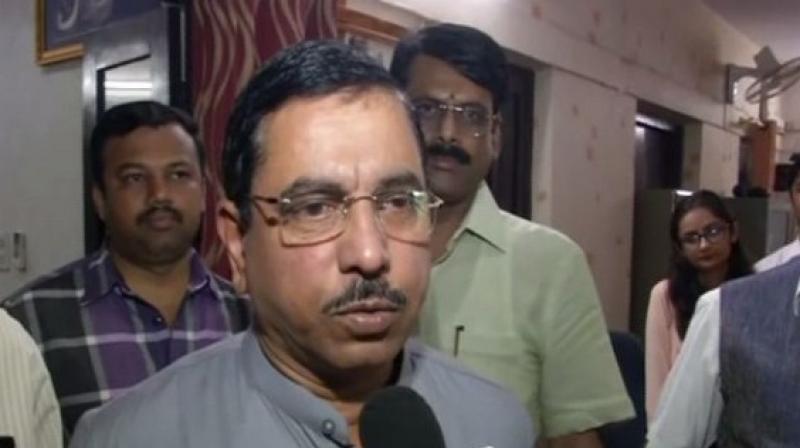 New Delhi: The separation between the BJP and Shiv Sena has now reached the Parliament. Shiv Sena MPs are being allotted seats on the Opposition side in both houses of parliament as its minister has resigned and the party is “working out” an alliance with the Congress and NCP to form government in Maharashtra, Parliamentary Affairs Minister Pralhad Joshi said on Sunday.

After the all-party meeting, Mr Patel said, “Shiv Sena’s minister has resigned from the NDA government. They are not attending today’s NDA meeting and working out an alliance with the Congress and the NCP. So it is natural that they will be allotted seats on the Opposition side in both houses.”

Shiv Sena had said on Saturday that it would not attend a meeting of NDA constituents on the eve of the winter session of Parliament, making clear that its exit from the national-level BJP-led alliance was almost certain.

Shiv Sena’s lone minister in the Narendra Modi government, Arvind Sawant, resigned on November 11. “I have learnt that the meeting (of NDA constituents) is being held on November 17. We had already decided against attending the meeting considering the developments in Maharashtra...our minister resigning from the Central government,” Shiv Sena MP Mr Sanjay Raut said.

According to sources, all the three Shiv Sena MPs in the Rajya Sabha have been allocated seats on the opposition side, while in the Lok Sabha it is yet to be done.

The Congress, NCP and the Shiv Sena had agreed ‘in principle’ to form the government in the state after the pre-election alliance of BJP and Shiv Sena broke up. The BJP, which won the maximum 105 seats in the 288- member House. Shiv Sena (56) seats NCP (54) and the Congress bagged (44) seats. The BJP- Shiv Sena alliance broke up as the BJP did not agree to its demand of having a Shiv Sena Chief Minister.