People started screaming and running as the python started to choke the forest ranger, its coils gripping his throat from the back. 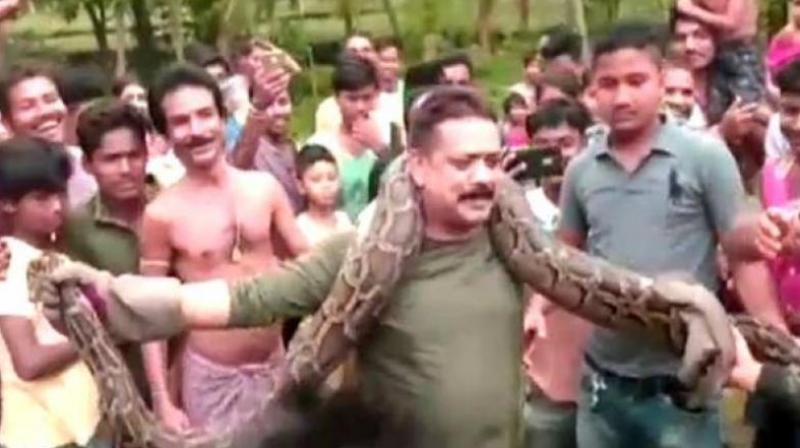 Kolkata: It may sound daring, look amazing, but a forest ranger in West Bengal learnt it the hard way that taking a selfie with python is never a good idea.

On Sunday, villagers in Jalpaiguri, 600 km from Kolkata called the ranger and his assistant to capture a rock python that had killed and eaten a goat. The forest officials rushed to the village and collared the 18-foot snake that weighed about 40 kgs.

The process deems that the snake be stuffed into a sack and carried away, to be released into the forest later. But swayed by the power of the selfie, the forest official grabbed the snake by its neck with his right hand and slung it around his neck.

The mobile phone cameras soon started flashing with selfie-takers going crazy and the forest official showing his courage as well as garnering compliments from the villagers.

But it was short-lived. Within seconds, the snake started wriggling, twisting and turning.

The forest ranger's brave act went for a toss with the slimy creature's movement and he started walking away from the crowds. People started screaming and running as the python started to choke the forest ranger, its coils gripping his throat from the back.

The tail of the snake slipped out of the hands of the person who was holding it.

#WATCH Narrow escape for Sanjoy Dutta, Range Officer of Baikunthapur Forest in Jalpaiguri after a python he rescued from a village almost strangled him to death while he was posing for selfies with locals. #WestBengal pic.twitter.com/KroJHOCOkk

A person in blue, possibly a forest department employee, ran forward to help the forest ranger's rescue. Amidst all these the person capturing the video seemed to have taken fright.

The forest ranger is heard telling his assistant in a voice of suppressed panic, "Hold the tail, hold the tail" and then "It's ok, it's all ok" as it coiled around his neck.

Despite all the fiasco, the "brave" forest ranger did not let go of the snake's neck even for a moment.