After the swearing-in, the Lt Governor was presented a guard of honour by the Puducherry police outside Raj Nivas 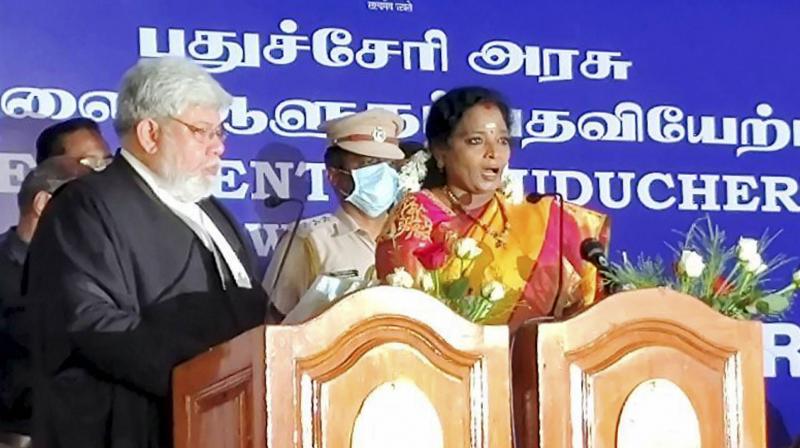 Puducherry: Telangana Governor Tamilisai Soundararajan, who was given additional charge of Puducherry, was sworn in as Lt Governor of the Union Territory on Thursday.

Chief Justice of the Madras High Court Sanjib Banerjee administered the oath of office to her at a simple function at the Raj Nivas.

Soundararajan took the oath in Tamil.

Earlier the Chief Secretary to Puducherry government Ashwani Kumar read out the warrant issued by President Ram Nath Kovind giving additional charge of the union territory to Tamilisai Soundararajan on February 16. Soundararajan taking charge as Lt Governor comes at a time when the ruling Congress-led government has been reduced to a minority after one more MLA quit the party on Tuesday.

After the swearing-in, the Lt Governor was presented a guard of honour by the Puducherry police outside Raj Nivas.

Tamilisai Soundararajan is the fifth woman to hold the post of Lt Governor of Puducherry. The others were Chandrawati, Rajendra Kumari Bajpai, Rajani Rai and Kiran Bedi.

She was given additional charge of Puducherry after former IPS officer Kiran Bedi was removed from office through a Presidential order on Tuesday. The Congress party had been demanding her recall for long,with Narayanasamy and Bedi being at odds over a host of issues.