42-year-old man recently returned from China after his health deteriorated. 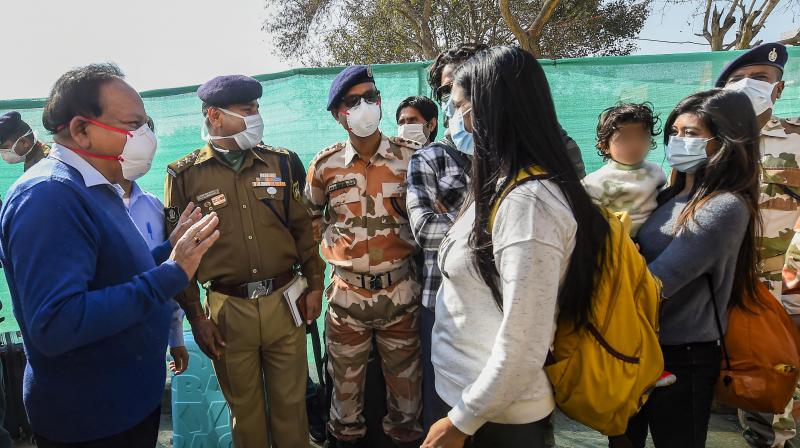 Union minister Harsh Vardhan interacts with Wuhan-returned Indians after they were released from the ITBP quarantine facility in New Delhi on Monday. (Photo: PTI)

PUDUKKOTTAI: A-42-year-old man from Tamil Nadu who returned from China recently died of suspected Coronavirus at a private hospital at Madurai on Saturday. The deceased hailed from Kothaimangalam village in Pudukkottai district.

Official sources said on Monday that the victim, Sakthikumar, who runs a small restaurant in China recently returned home due to jaundice and underwent treatment in his village. However, due to manpower shortage to run his eatery there, he returned to China recently, despite his jaundice.

Sakthikumar again returned home as his health deteriorated. He was admitted to a private hospital at Madurai on Friday, but he died on Saturday. Public health department officials suspect that Sakthikumar’s health could have been aggravated possibly by coronavirus attack.

After his sudden death, public health department have now camped at his village, some 100 km from the district headquarters town of Pudukkottai, to thoroughly investigate whether Shakthikumar’s death was caused by nCoV or was due to other medical factors, sources added.

According to family members, Sakthikumar had landed at Tiruchy airport from China on February 4, travelling via Thailand and Kuala Lumpur. His family members did not suspect any symptoms of Coronavirus, though he had been making frequent trips between India and China. For an average Tamil-speaking family, they were unable to immediately recall the name of the Chinese town.

Family sources said that he had a history of several health complications, involving his lungs and liver-related ailment for the last two years and had been treated at a private hospital in Thanjavur. They further said Sakthikumar died due to his “prolonged illness of his lungs and liver”, besides the jaundice he was recently suffering from. The social media was needlessly playing it up to divert attention, the family sources said.

Meanwhile, the health department officials secured all the medical files related to his treatment in the last two years and have sent the same to Chennai for clinical analysis.