After the chief minister's address, the resolution introduced by Delhi government's Law minister Kailash Gahlot was passed with a voice vote 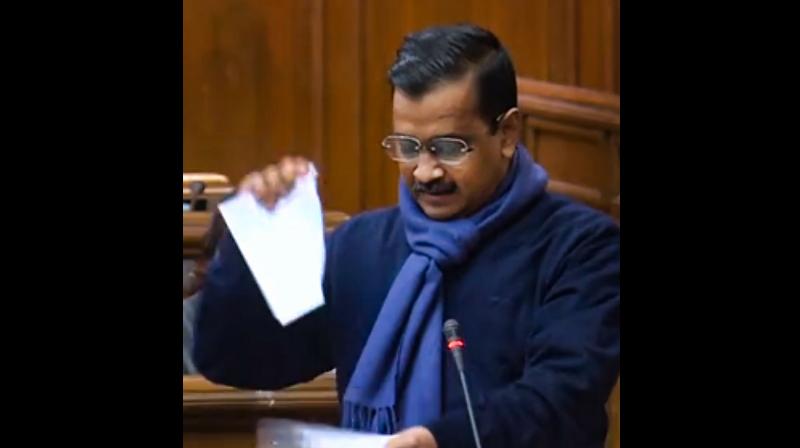 New Delhi: The Delhi Assembly on Thursday passed a resolution against the Centre's three new agriculture laws with Chief Minister Arvind Kejriwal tearing up their copies, saying he cannot betray the farmers of the country.

Addressing the Delhi Assembly, the chief minister also alleged the laws have been made for "electoral funding of the BJP and not the farmers".

"I am pained that I have to do this. I did not intend to, but I cannot betray the farmers of my country who have been sleeping on the streets in the cold when the temperature is just 2 degrees Celsius," Kejriwal said, while tearing up the copies of the three laws.

"I am a citizen of this country first, a chief minister later. This assembly rejects the three laws and appeals to the central government to meet the demands of the farmers," he said.

Kejriwal further said 20 protesting farmers have died so far and asked the Centre when it will "wake up". He also questioned the urgency of passing the bills during the COVID-19 pandemic and alleged it was done without voting.

He said the Centre should not be under the impression that the farmers camping at the protest sites will simply return to their homes, adding that in 1907, a farmers' protest continued for nine months till the British rulers repealed three laws in Punjab.

When asked about the benefit of the laws, every BJP leader says farmers can sell their produce anywhere in the country. It seems they have consumed opium where should farmers go to sell their crop at minimum support price (MSP)? Farmers are getting less than MSP on selling paddy in UP and Bihar, the chief minister said.

He also claimed that due to the three new laws "big capitalists will sell produce at a higher price", which will lead to price rise.

Kejriwal also assailed his UP counterpart Yogi Adityanath, saying he watched him on TV citing benefits of the new farm laws.

"He said that farmers will not lose their lands and the Mandis will continue. Are these any benefits? The Centre said in the Supreme Court that our counsel was arguing in favour of the farmers, should we have argued for the middlemen," Kejriwal asked.

After the chief minister's address, the resolution introduced by Delhi government's Law minister Kailash Gahlot was passed with a voice vote.

Besides Kejriwal, copies of the new agri laws were torn in the House by Development minister Gopal Rai and AAP MLAs Mahendar Goyal and Somnath Bharti.

Participating in the debate, Rai slammed the BJP-ruled Centre for not permitting farmers to stage their protest at the Ramleela ground in Delhi and held them responsible for the continuing impasse at the city's borders.

"The deaths of protesting farmers at the borders could have been avoided if they were permitted to hold protest at Ramleela ground. BJP is responsible for the road blocks on the borders," Rai charged.

The BJP legislators hit out at the AAP saying it was opposing the laws in view of Punjab assembly elections in 2022.

Leader of Opposition Ramvir Singh Bidhuri also questioned the AAP government as to why it was opposing the farm laws when it had notified one of them in November.

Bidhuri asserted that the farm laws will enhance crop yield and triple farmers' income while demanding that Kejriwal implement the Centre's schemes for farmers in Delhi.

Assembly Speaker Ram Niwas Goel adjourned the House till 5.15 PM when the ruling AAP MLAs trooped into the well of the House, tore off copies of the laws and raised slogans demanding that the Centre repeal them, even after the resolution was passed.

Goel finally adjourned the House till 11 AM on Friday, after the AAP MLAs again trooped into the well raising slogans as the House reconvened.

The AAP MLAs burnt copies of the laws in the Assembly premises after the House was adjourned.