India   All India  17 Aug 2017  Nails in the coffin of the British empire
India, All India

Nails in the coffin of the British empire

When India became independent, these patriots were neither acknowledged nor reinstated nor granted pension. 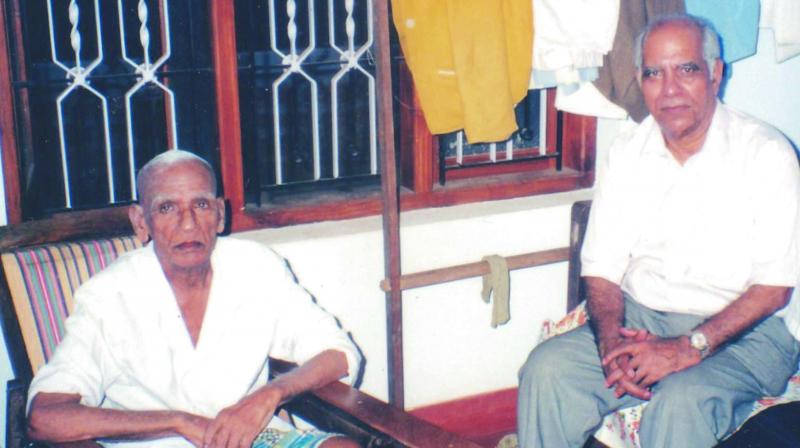 India’s freedom wasn’t won solely by nonviolent means. Blood and sweat flowed freely in the first half of the 20th century, and many young men and women attained martyrdom. Apart from evergreen hero Netaji Subhas Chandra Bose and immortal icon Bhagat Singh, images of many other martyrs come to mind as we celebrate 70 years of freedom.

India’s freedom wasn’t won solely by nonviolent means. Blood and sweat flowed freely in the first half of the 20th century, and many young men and women attained martyrdom.

Apart from evergreen hero Netaji Subhash Chandra Bose and immortal icon Bhagat Singh, images of many other martyrs come to mind as we celebrate 70 years of freedom.

Believe it or not, I lived in Pune for years, and visited Rajgurunagar several times but never figured out who Rajguru was! A decade passed before I realized it was Shivram Rajguru, who went to the gallows with Bhagat Singh and Sukhdev Thapar on March 23, 1931 for the fatal attack on the policeman, Saunders. An estimated 10,000 persons laid down their lives between 1857 and 1947.

As World War I broke out in 1914, Ghadar Party declared war on the British and exhorted its members to return to India to organize an armed uprising. Government records indicate that 2,312 Ghadar men entered India between October 13, 1914 and February 25, 1915. By 1916 their numbers had exceeded 8,000. They established contacts with Bengal revolutionaries such as Rash Behari Bose whose comrades were Sachin Sanyal and Vishnu Ganesh Pingle. Their main strategy was to induce Indian soldiers to revolt. Ghadarites even went to Iran and Iraq to instigate Indian troops against the British.

Rash Behari Bose planned a large-scale uprising in February 1915 in association with the Ghadarites. The plot was leaked and many Ghadarites were arrested. Bose eventually escaped to Japan.

On September13, 1915 the judgment in the First Lahore Conspiracy Case was pronounced. 24 persons were sentenced to death, among them 19-year-old Kartar Singh Saraba, who had returned from the University of California, Berkeley, to fight for India’s freedom.

Lord Hardinge, the Viceroy, personally intervened to commute the death sentences of 17 persons. The other seven were executed on November 17, 1915. A total of 40 men were sent to Kalapani.

According to O’Dwyer, the infamous architect of the Jallianwala Bagh massacre, the Ghadar movement "was by far the most serious attempt to subvert British rule in India."

In May 1917, eight Indians were indicted by a federal grand jury in San Francisco on charges of conspiring to form a military enterprise against Britain. However, Britain’s request for their deportation was declined by the United States because of the strong public support in favor of the Indians. The trial came to be known as the Hindu-German Conspiracy trial and attracted unprecedented media attention. It lasted from November 1917 to April 1918 and involved 18 Indians, 9 Germans and 9 Americans.

Sohanlal Pathak was convicted for inciting revolt among the Indian soldiers stationed in Burma, Malaya and Singapore. Indian soldiers in Singapore revolted in March 1915, but were brutally suppressed. Pathak died on the gallows in Mandalay Jail on February 10, 1916.

Justin Trudeau, Prime Minister of Canada, in 2015 expressed regret for the Komagata Maru incident of 1914. That was when the majority of Indians got to know about the ill-fated ship that had been turned away at Vancouver ultimately forcing the 372 hapless passengers to land in India where the majority of them were massacred by the British. 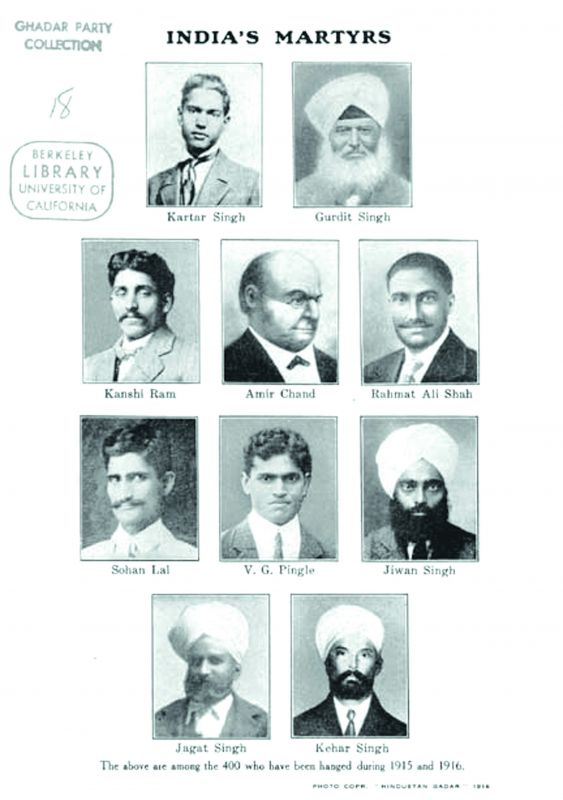 Surya Sen chose the path of militancy in 1918, maintained a low profile and set up revolutionary centres in the tea-garden areas of Assam-Silchar, Karimganj, Gauhati and Sibsasgar. Arrested in 1924 he was detained without trial for four years. After the Chittagong Armoury Raid he remained incognito until he was captured on February 16, 1933 after a tough encounter with the police. He died on the gallows in the Chittagong Jail on January 11, 1934.

While remaining underground Masterda nominated Pritilata Waddedar to lead the raid on the European Club at Pahartali on September 23, 1932. The militants stormed the club and Pritilata shot and killed an Englishman, but they were soon outnumbered and had to retreat. Pritilata was wounded in the melee and consumed cyanide to end her life.

The Jabalpur Mutiny, 1946
On February 26, 1946, barely a week after the Naval Uprising, a troupe of 120 army men stationed at Jabalpur (the J company of the Signals Training Centre) went on strike, storming the prison and liberating the 17-year-old B.C. Dutt. The ranks of the mutineers swelled to 1,700 in a few days. The British retaliated with a bayonet charge by the Somerset Light Infantry which killed 8 men and wounded 32 others. 41 men were sent to prison, 80 were court-martialed and dismissed, and the episode was hushed up. But the mutiny caused much agitation in British circles. The loyalty of the British Indian Army could no longer be taken for granted. Claude Auchinleck, then Commander-in-Chief of the Army sent frantic cables to England suggesting that the British pull out of India altogether.

When India became independent, these patriots were neither acknowledged nor reinstated nor granted pension. After decades of appeals and court petitions, 41 persons were granted a meagre pension. A mutineer from Kerala, M.A. Kochuvareed, followed up his petitions for over six decades with no success. Lance Naik Neelakantan Nair approached Kerala High Court, which directed the Central Government to consider his petition. In 2003, the Ministry of Home Affairs stated that “it has been decided at the level of the Home Minister that they cannot be treated as freedom-fighters.” The man in the chair was none other than L K Advani. 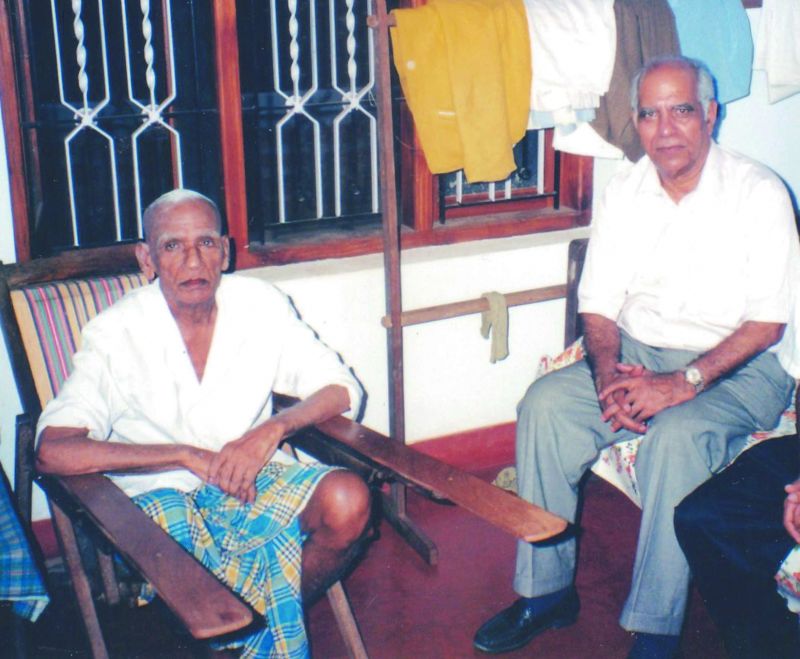 Militancy and Sacrifice
The first decade of the 20th century saw many militants being sent to the Andamans. Barindra Kumar Ghose, brother of Aurobindo Ghosh, writes of Kalapani in his memoir, “The langoti we were given to put on while bathing could not in the least defend any modesty. Thus, when we had to change our clothes, we were in as helpless a condition as Draupadi in the assembly of the Kauravas.” This hilarious historical narrative throws light on many incidents which our history books have glossed over. “The Great War broke out in 1914. Its repercussions affected even India and gave birth to the Lahore Conspiracy. As a consequence some 50 men of the Gadar Party had to seek the King’s hospitality in Port Blair.”

The Chapekar brothers, Damodar, Balkrishan and Vasudev, together with Mahadev Ranade were hanged in 1898-99 for the murder of Pune Plague Commissioner, Rand and Lt. Ayesrt, who were shot dead on June 22, 1897. Madanlal Dhingra, a protégé of ‘Veer’ Savarkar, shot and killed Col. William Curzon Wyllie in London and was sent to the gallows on August 17, 1909.

The Alipore Bomb Case of April 1908 was perhaps the first high-profile conspiracy to evict the British from India. When the judgment was announced on May 6, 1909, Aurobindo was acquitted (after spending a year in jail), while his brother and a few others were sentenced to death. Later the death sentences were commuted to life imprisonment, so Barindra Kumar lived to tell his story, while Aurobindo turned to spiritualism.

At a railway station on June 17, 1911 Robert William D'escourt Ashe, Collector of Tirunelveli, was shot dead by Vanchi Iyer, who then trained the revolver on himself. Vanchi had carefully planned this along with his brother-in-law Shankar Krishna Iyer, the Paris-returned V.V.S. Iyer and others. They had picked June 11 as it was the coronation date of George V, but the Collector was away so the plan was deferred. In the July issue of Vande Mataram, Madame Cama wrote, "When decorated slaves from Hindustan were parading the streets of London as performers in a Royal Circus (a reference to the Coronation) and demonstrated their subservience to the King of England, two young and brave countrymen of ours proved by daring deed that Hindustan is not slumbering. The shots that Vanchi fired did help arouse a slave nation from the century-old slumbering."

The Delhi Conspiracy Case started with a bomb attack on the Viceroy, Lord Hardinge, on December 23, 1912 while he was riding an elephant through Chandni Chowk during the inauguration of Delhi. Hardinge escaped but 4 patriots were hanged for this offence.

In the Raja Bazar Bomb Case of 1913, Amrita Lai Hazara was sent to the Andamans for 15 years. The Dacca Conspiracy Case, the Barisal Conspiracy case of 1913, Shibpur Dacoity Case of 1915, the Pragpur dacoity case of 1915, all contributed prisoners to Kalapani. The Taxi-Cab Dacoity Case of 1915 saw many of the players get away. However, in September 1915, at Balasore in Orissa, Chittapriya Ray Choudhuri and Jatin Mukherjee died in a shootout with the police, while Nirendra Dasgupta and Manoranjan Sengupta were captured, tried and sentenced to death. Jyotish Pal was sent to the Andamans.

The Rampa rebellion in Visakhapatnam organized by Alluri Sitarama Raju posed a serious threat to British authority, but he was treacherously shot dead by the police on May 7, 1924.

Binoy Krishna Bose, a medical student, hit the headlines when he killed Lowman, the I.G. of Police at Dhaka Medical College Hospital on August 29, 1930. On December 10, 1930 he claimed another victim, this time aided by Sudhir Gupta (Badal) and Dinesh Gupta at the Writers' Building, Kolkata. Their target was Col. Simpson, the I. G. of Prison. After the daring attack, the trio consumed cyanide. Badal died instantaneously, while Binoy died in hospital. Dinesh survived and was hanged on July 7, 1931.

In the Morazha incident in Kannur, Kerala on September 15, 1940, Comrade K.P.R. Gopalan was sentenced to death after a peasants and workers march was lathi-charged by the police, culminating in the death of two policemen in stone-throwing. On the same day protestors clashed with the police at Mattannur and Thalasasery. Comrades Abu and Chathukutty died in police firing at Thalassery. KPR’s sentence was later commuted to life imprisonment following public pressure and Gandhi’s intervention.

Abdul Khadir Mohammed, a man from Vakkom, Thiruvananthapuram, joined the INA in Malaya in 1942 and was sent to India in a submarine on an intelligence assignment. When he landed on the Calicut coast he was arrested, charged with spying for a foreign power and hanged in the Madras Penitentiary on September 10, 1943.