No wonder, the sale of the stone crafts, marketed by the state handicraft department, has increased from Rs 14 crore to Rs 26 crore in one year. 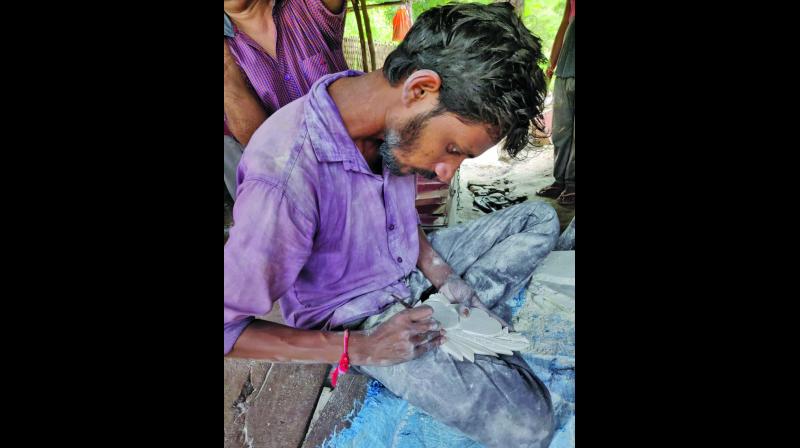 The department has now set a target to increase the sale by ten times in the coming financial year, the bureaucrat added.

Bhopal: Stone craftsmen of Madhya Pradesh, who have switched over to other professions owing to lack of market for their artworks, have now been drawn back into their workshops, thanks to an “innovative” move by the MP government.

A project, christened as “Speaking Stone”, has been launched by the MP handicrafts department to woo the craftsmen who have migrated to other states in search of work, back to their traditional crafts in order to revive the dying arts of Central India.

Under the project, the artisans have been imparted training to hone their skills to make themselves relevant in the modern-day art market, besides finding markets for their products.

“We have hired national award winner master craftsmen to expose them to the modern art market and upgrade their skills to ensure that their creations meet the tastes of art connoisseurs and collectors,” MP handicraft and handloom commissioner Rajeev Sharma told this newspaper.

“A fundamental change in outlook of the craftsmen, brought due to their skill upgradation training, coupled with our new marketing strategy has worked wonders. We have tapped different markets for their artworks to ensure that they get right prices of their products,” Mr Sharma said.

No wonder, the sale of the stone crafts, marketed by the state handicraft department, has increased from Rs 14 crore to Rs 26 crore in one year. The department has now set a target to increase the sale by ten times in the coming financial year, the bureaucrat added.

A fresh look into the very concept of creation of arts has been given.  Craftsmen are being trained to produce artworks from utility objects which they used to make earlier.

For example, a Durga idol has been redesigned to find its place in the living room as an art piece rather than a statue in the “puja room”.

The idol made of marble stone is designed in such a way that the face of statue dazzles when it is positioned in front of a light.

“Art fetches money,” Niraj Ahirwar, a stone craftsman here said while backing the new concept coined by the handicraft department to woo craftsmen back to their trade.

The department has established training centres particularly at places close to famed monuments such as Khajuraho, Bateswar and Sanchi Stupa where descendants of creators of such architectural marvels reside.

The state handicrafts department has opened showrooms in 29 states besides selling the products online.