Other Congress leaders sat on a symbolic protest. 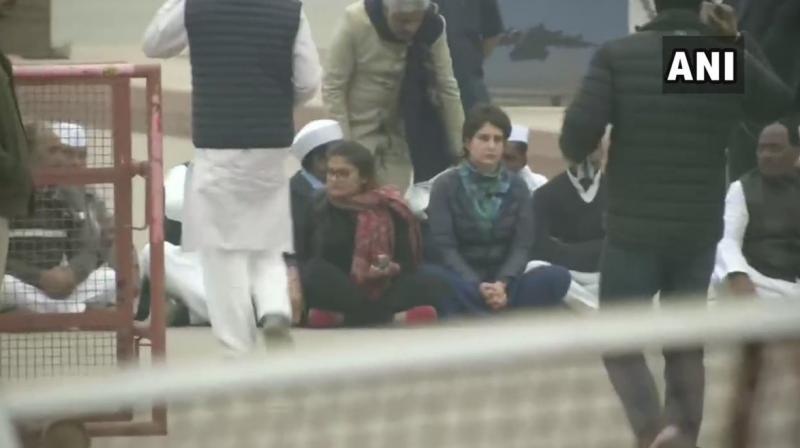 New Delhi: Congress leader Priyanka Gandhi Vadra on Monday lead a Congress protest at India Gate against police crackdown on Delhi students which took place on Sunday during students' protests over the Citizenship Amendment Act in Jamia Milia Islamia in the national capital and the Aligarh Muslim University in Uttar Pradesh.

The protest, which started at 4 pm under her leadership, will continue for the next two hours. Sitting on the protest along with a slew of other Congress leaders, Priyanka was holding a placard, which reads: "Stop attacks on young students."

"This is a government that has attacked the rights of youths and students of the country. That is why Priyanka Gandhi Vadra and other senior Congress leaders have decided to sit on a symbolic protest at the India Gate from 4 pm for the next 2 hours," said Congress spokesperson Randeep Singh Surjewala.

Earlier in the day, the Congress general secretary blamed the ruling-BJP government for the violence that erupted in Jamia University last night, alleging that the government has attacked the Constitution and the students.

"The government has attacked the Constitution and the students. They attacked students after entering the university," Vadra told reporters here.

On Sunday, several students and cops sustained injuries in a protest in Jamia Nagar area.

The protesters had set the DTC buses on fire near Bharat Nagar area on Sunday after demonstrations turned violent. Protestors also vandalised a fire tender that was sent to douse the fire, injuring two firemen inside the vehicle.

Delhi Police PRO MS Randhawa had said that a section of the mob had turned violent and started pelting stones on the police and at houses due to which police were forced to resort to baton charge and firing tear gas shells.

The Citizenship (Amendment) Act, 2019, seeks to grant Indian citizenship to refugees from Hindu, Christian, Sikh, Buddhist and Parsi communities fleeing religious persecution from Pakistan, Afghanistan, and Bangladesh and who entered India on or before December 31, 2014.

The Citizenship (Amendment) Bill was passed from Parliament earlier this week and became an Act with President Ram Nath Kovind giving his assent to it on November 12.