Ravi reiterated and mooted the idea of doing a course correction in the functioning of the council. 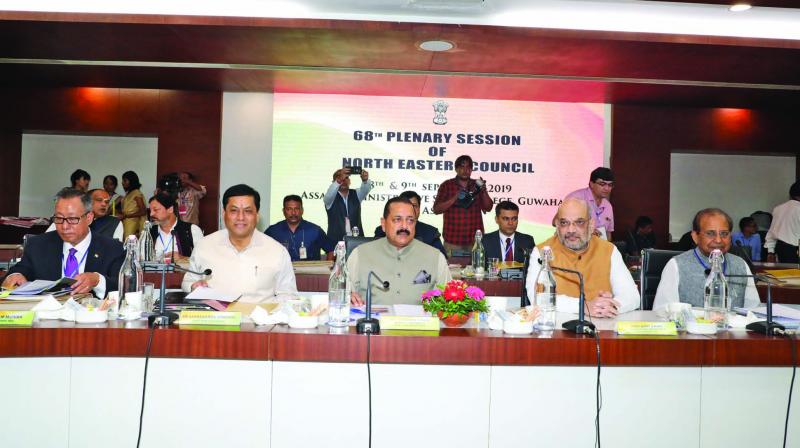 A plenary session of North Eastern Council in progress.

Guwahati: In what has been backed by several chief ministers of northeast, Nagaland governor R.N. Ravi has proposed that the North Eastern Council should focus on its original objective of integrating the Northeast instead of acting as a funding agency for the states by envisaging shared-infrastructure projects for entire region.

Pointing out that the North Eastern Council has virtually reduced into a funding agency for northeastern states, Mr Ravi while addressing the 68thplenary session of the council said that formation of NEC was meant to neutralise the impact of the centrifugal politics that the British had started to divide the region on various ethnic and religious lines.

Mr Ravi said that interdependence of ethnic communities in the Northeast was disrupted by the deliberate policies of the British administration and several economically-unviable states were created to appease the forces asserting mutual differences and exclusivity.

Mr Ravi, who is also interlocutor for the Naga peace talks, said that the northeast India, all through the centuries, has been a region of geo-cultural and geo-economic unity and celebrated its rich cultural diversity through peaceful coexistence of innumerable ethnic communities during the pre-British period.

“The vibrant social interactions and rich economic interdependence of the ethnic communities including those among the hills and the plains were disrupted by the deliberate policies of the British administration. Neighbours became strangers, mutually suspicious of each other. The post-colonial period witnessed aggressive ethnic assertions. More and more communities began to demand exclusive homeland for themselves. The post-colonial Northeast witnessed multiple political fragmentation of the regions. The traditional forces of unity were weakened. Several economically unviable states were created to appease the forces asserting mutual differences and exclusivity,” Mr Ravi said.

He also argued that it was in this background that soon after the re-organisation of the state in the Northeast in 1971, the North Eastern Council was formed in 1972.

Asserting that idea behind the formation of NEC was to establish an institution that can envisage infrastructural projects of the “shared” interest of all the northeastern states besides restoring the social interactions, Mr Ravi said that idea behind setting up Northeast Hills University (NEHU) at Shillong by NEC was to create an institution where students from entire northeastern states can study together. However, the objective of developing “shared” institution was defeated soon as NEC started setting up “unviable” central universities.

The idea behind setting up Northeast Police Academy (NEPA) was also the same to facilitate a joint training platform for all the police personnel of northeastern states, he said regretting that subsequently all the states started their own police training academy.

Mr Ravi reiterated and mooted the idea of doing a course correction in the functioning of the council.

The idea of course correction in North Eastern Council was also supported by chief ministers of Arunachal Pradesh, Tripura and many other chief ministers who while addressing a meeting of North East Democratic Alliance pleaded to  Union home minister Amit Shah to look into the proposal.