Kumar had accompanied his pregnant wife for a check-up when a man came from behind and hit Kumar on the head with an axe. 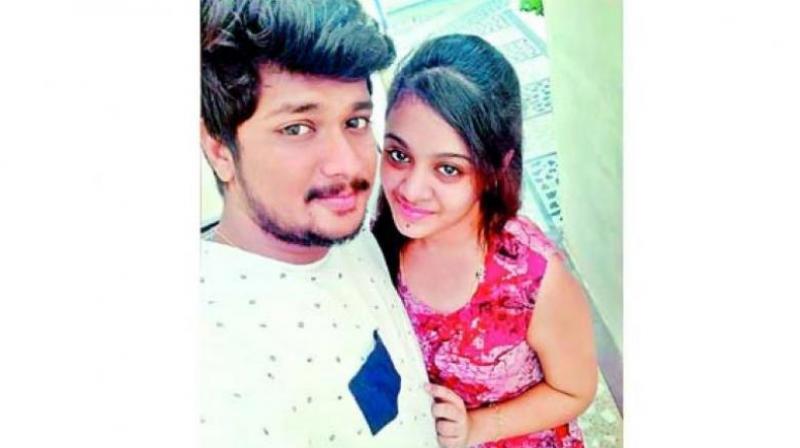 The woman's family was opposed to the marriage because Kumar belonged to a different caste. (Photo: DC)

Hyderabad: The curse of caste claimed another life on Friday when a Dalit man was hacked to death in broad daylight in front of his five-month pregnant wife and his mother, at Miryalaguda in Nalgonda district on Friday. The victim, P Pranay Kumar, 24, had married T Amrutha Varshini about six months ago. His wife’s family was opposed to the marriage because Kumar belonged to a different caste.

The police has booked Varshini's father T Maruthi Rao and uncle T Sravan for the murder. Both men are absconding. Police said Kumar had accompanied his pregnant wife for a check-up at Jyothi hospital in Miryalaguda. When they were leaving at about 1:45 pm, an unidentified person came from behind and hit Kumar on the head with an axe. As Kumar fell to the ground the attacker struck again, this time to the neck. Varshini and Kumar’s mother immediately ran to the hospital screaming for help.

Ms T. Amrutha Varshini collapsed on the ground and is undergoing treatment at the ICU.  Varshini collapsed and is undergoing treatment in the intensive care unit. According to the family, Kumar and Varshini were in love since they were in Class 10.  The police suspect that Kumar was attacked by a hired killer for Rs 10 lakh and that the murder was being planned for three months.

The situation was tense in Miryalaguda following the murder with the dead man’s family wanting immediate arrest of the culprits. Varshini’s father Maruthi Rao is a real estate businessman.  During marriage, the boy’s parents had told the police that Kumar faced a threat to his life from Varshini’s family.  The police had intervened then but their warnings have not been taken seriously.