India   All India  16 Sep 2017  Doctor in the house: An ode to the family physician lifestyle
India, All India

Doctor in the house: An ode to the family physician lifestyle

However, when it came to the family doctor, each community would gravitate towards its own. 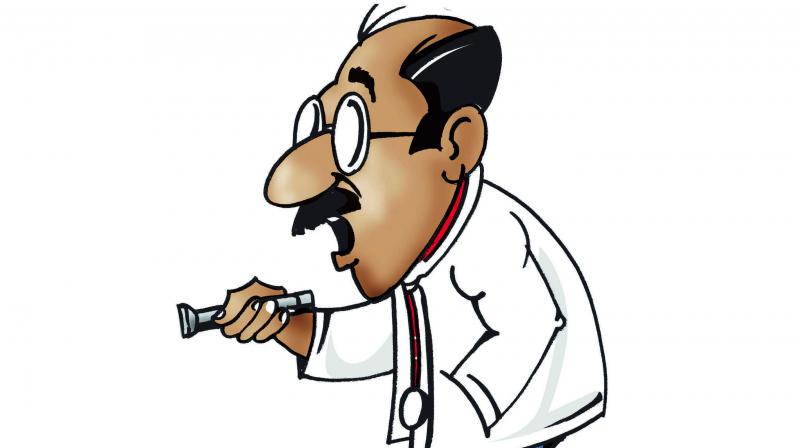 The doctor, for all his apparent eccentricity, knew his onions.

During the ‘60s and ‘70s our family was based in Calcutta. A bustling metropolis that boasted a happy sprinkling of people from all over India, gainfully employed in the corporate and public sectors. While these ‘expatriate’ communities got along famously, and melded seamlessly with the native Bengali populace, the unique ethnic characteristic of each regional group naturally drew them together - socially and culturally. The Punjabis had their own association, the Marathis herded together at the Maharashtra Niwas, the Parsee Club hosted the gregarious Parsees, and the south Indians congregated at the South India Club. The south Indians were further sub-divided and corralled into the Bharati Tamil Sangam, Andhra Association, Kerala Samajam and Karnataka Bhavan – collectively and somewhat derisively, referred to as ‘Madrasis’. There was nothing parochial about it. It was just a natural coming together of like-minded individuals sharing a common background.

However, when it came to the family doctor, each community would gravitate towards its own. The Punjabis had their Dr. Chadda, the Marathis Dr. Ranade, and our Madrasi families patronised Dr. Krishnaswamy. They were all ‘family doctors’, a concept as rare as hen’s teeth today. Meaning if you came down with the flu, the doctor came home and attended to you. He also chatted over a cup of coffee, discussing politics, cricket and M.S. Subbulakshmi’s Meera bhajans. Somewhat incongruously, the South India Club had a septuagenarian Bengali, Dr. Ghosh, for ministering to the health of its members. Dr. Ghosh’s favourite diagnostic pronouncement was, ‘Pet-er gondogol’ (stomach problem).

What was unique about these family doctors was their simple, common sense approach to diagnosis and treatment. They had their own peculiar angularities. Take Dr. Krishnaswamy. It mattered little to him what particular ailment was troubling you. Stomach pain, fever, the sniffles, the trots, coughs and sneezes, headaches – he had a standard, catch all approach to the problem. He would first stick a thermometer into your mouth, and while the seconds ticked by, immerse himself in his favourite newspaper. At times he would even forget there’s a patient sitting in front of him till you made some unintelligible, mumbling sounds from your clamped mouth. At which point, he would look up speculatively from his paper, draw out the thermometer, examine it closely, fractionally raise his eyebrows, followed by a sharp intake of breath along with a prolonged sibilant, hissing sound and finally, an even more disconcerting ‘Oho ho!’ The patient had by then given up the ghost.

The good doctor would then ask you to raise your shirt, ticklishly poke your midriff randomly at various places, ask you to stick your tongue out and say ‘aaaahhh’, check your pulse, then some deep breathing for the stethoscope, and we were done. Without a word being spoken, he would then fish out his prescription pad, scribble a few lines which only he, his Maker and the man at the nearby pharmacy could decipher. He could have been prescribing a harmless placebo, for all you knew, if you’ll excuse the persiflage. The doctor, for all his apparent eccentricity, knew his onions. Though it was always a matter of puzzlement to me that he hardly ever spoke.

In the background stood the shadowy figure of the ‘compounder’, a grim, bespectacled Bengali gentleman with a hacking cough, dressed in the traditional dhuti-panjabi. And irrespective of the complaint, I would come away with a bottle of bright, crimson mixture with a serrated paper strip stuck on to indicate the dosage. It tasted like nothing on earth, but within a couple of days, you felt better. My father held a theory that the greater the medicine’s bitterness, the higher its potency!

As children, the worst case scenario at the doctor’s was to be administered an injection. For reasons best known to himself, he would invariably deliver a prefatory remark, ‘Now this won’t hurt, you’ll just feel a slight prick’. And when the needle entered the fleshy part of your arm, you howled as if you were entering the Seventh Circle of Dante’s Inferno.

For which trouble, you were roundly chastised by your father, mother and the doctor. ‘Don’t be such a fusspot’, being the general purport of their invective. Talk about adding insult to injury. The doctor’s visit mercifully over, I felt infinitely worse than prior to entering his ‘chamber’, with the vague promise that ‘every day, in every way, I will get better’. In God’s good time, you did get better. How much of it was down to Dr. Krishnaswamy will always remain a conundrum.

Another GP I fondly remember in Calcutta was Dr. Rehman, who treated the affluent and the indigent rickshaw puller with the same cheery familiarity. I vividly recall his crowded waiting room where his chain smoking secretary Mamaji presided, and at times, helped us jump the queue. A fish tank, which housed a large, black fish of unknown provenance, rivetted our attention. It was the ugliest fish I had ever laid eyes on, with what looked like protruding front teeth, bearing an uncanny resemblance to the unprepossessing Mamaji.  We would throw bread crumbs into the tank, just to show there was no ill feeling.

I end this ode to the family doctor with my birth. The story is told, umpteen times, that were it not for our visiting village physician, Dr. Kunju, I may not have lived to tell the tale. Within days of my mother giving birth to me in the rice bowl village of Tiruvalangadu by the banks of the Cauvery, it was a toss-up between my mother and I as to who would survive. The elders deemed that I was the dispensable one, till Dr. Kunju stepped in and declared, ‘I will try this one last attempt to save the baby’s life’.

So saying, he plunged a large syringe full of glucose into my stomach, and almost at once I recovered miraculously with a blood curdling scream that my grandmother swore sounded like the ragam Kalyani. Our family was (is) big on Carnatic music. Dr Kunju, syringe-bearing knight in shining armour. I owe my life to him — our family doctor.

The author is a brand consultant with an interest in music, cricket and good humour