‘Bullets in Gauri’s body were meant for us’

She was connected to struggles on the ground as well as to individuals from marginalised backgrounds. 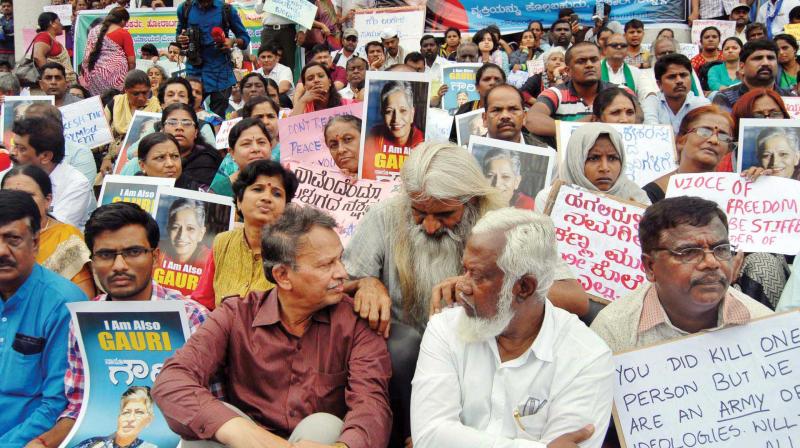 Writers, activists and thinkers participate in a protest against the killing of journalist Gauri Lankesh. (Photo: KPN)

I first met Gauri Lankesh when she invited me to speak at a students’ convention in Bengaluru, where student leaders from HCU’s Rohith Vemula agitation and local student leaders were also present. Speaking last, I summed up the details and points of contention of the students’ struggles across the country. As I spoke about the Rohith Vemula movement, I noticed tears in Gauri’s eyes. After the programme she gifted me a skirt and a pair of trousers. She also sent a shirt for Kanhaiya, who had just been released from jail. She understood the importance of care in camaraderie, an aspect that is often overlooked in progressive movements.

Recently, a Dalit student needed some financial help. Even though demonetisation had affected the sales of her magazine badly, Gauri came forward to help, as she did during the anniversary of the Una movement, commemorating the historic resistance of Gujarat’s Dalits to caste oppression. She was not an armchair intellectual, who would only theorise about caste. She was connected to struggles on the ground as well as to individuals from marginalised backgrounds. This is also the reason why the news of her assassination won’t sink in easily. She was not some remote icon, some distant figure, but a very cheerful and friendly comrade. Her murder hit home and it almost feels like we are next on the hit list. As John Dayal said, the bullets pumped into Gauri’s body were meant for all of us. They were meant as a reminder, a silencing tactic for those of us who oppose the politics of the Sangh Parivar.

The last time I called Gauri Lankesh in utter panic was when I heard the news of her conviction in a defamation case over a story published by her magazine against a BJP MP from Dharwad, Prahlad Joshi. She had been sentenced to six months in prison. I was relieved the moment she answered her phone. She had managed to get bail and did not have to do jail time. Gauri was convicted because she held on to the highest ethics of journalism and refused to compromise her sources, who were also in the BJP. She chose not to divulge details of her sources, and opted for conviction instead. On the night of  September 5, when a friend called me to say that Gauri Lankesh had been murdered, I thought it was a bad joke, and went into momentary denial. I called her phone in the hope that she would answer and I could heave a sigh of relief. This time, however, no one answered.

The murder is widely being seen as one in a series of assassinations of rationalists like Prof. M M Kalaburagi, Govind Pansare and Narendra Dabholkar by right-wing outfits. The preliminary investigation has revealed that  the same 7.65 mm country-made pistol that was used in the earlier murders, was also used to murder Gauri Lankesh. As pointed out by Paranjoy Guha Thakurta in a condolence meeting held at the Press Club of India, Delhi, what made these people vulnerable was the fact that they wrote in the vernacular medium. Choosing to work in the hinterlands, or away from Delhi, challenging caste and superstition at the grassroots, these writers and rationalists offer a much stronger cultural resistance to the RSS than those of us who think, read and write in English. In other words, it also means that those of us who are still alive are safe because we are not inconvenient enough to the RSS. Not yet.

Gauri’s sister, Kavitha, who was very close to her, said that there could only be one suspect, right-wing activists, as Gauri was a vocal critic of the  RSS and BJP. Those who are celebrating the murder on social media are staunch RSS supporters and who write in their bios that they are “blessed to be followed by Prime Minister of India, Narendra Modi.” Narendra Modi has not yet condemned the murder of Gauri Lankesh. Most interesting is a comment made by a BJP MLA from Karnataka, D N Jeevaraj, who said that Gauri Lankesh would have been alive had she not written against the RSS!

If justice is to be delivered to Gauri Amma, it cannot be done by simply finding the mercenaries, who shot her in cold blood. The deeper links behind these murders must be exposed. The armed extremist outfits that sponsor these murders must be rooted out. For the longest time in India, successive governments have cracked down on Islamic extremists, far Left outfits, Khalistanis, and so on, but have given a free hand to the Sangh Parivar to run armed outfits and terror networks. Maya Kodnani, Sadhvi Pragya and Col. Purohit are all out on bail. Swami Aseemanand has been acquitted despite having confessed to his crime, because the investigation is so shady. It wasn’t very long ago that public prosecutor, Rohini Salian, revealed  she was asked to go soft on Hindutva terror outfits. The present government at the Centre is cultivating lynch mobs and terror outfits by imparting them such impunity.

The c government has a chance to expose these terror outfits and do real justice to Gauri Lankesh’s dream of a society, where we are ruled not by hatred, but by the Constitution.

The writer  is an M.Phil student attending the Jawaharlal Nehru University and vice-president of the students union from 2015-16. She is a member of the All India Students Association.