The Assam chief minister himself visited worst flood-hit district of Barpeta and reviewed the situation on the spot. 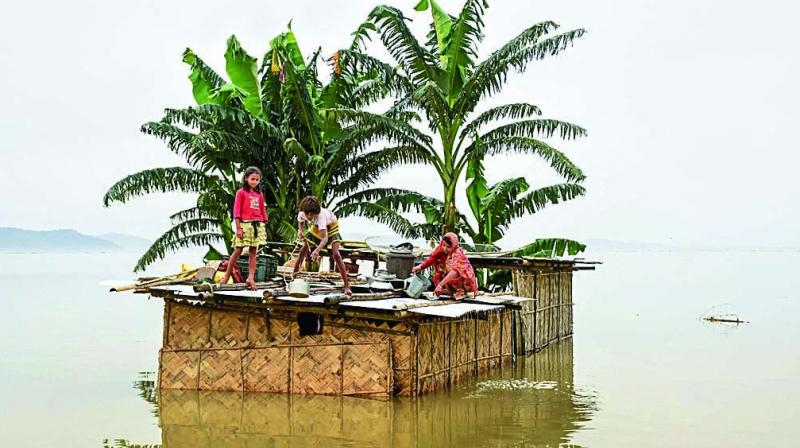 A family marooned on the top of a hut in the flood-hit locality of Panikhaiti in Kamrup district of Assam on Monday. (Photo: PTI)

Mr Sonowal also briefed the Prime Minister about the relief provided to the flood-affected people and also explained about the rescue operations that have been undertaken by NDRF and SDRF.

The NDRF and SDRF has rescued 7,833 people by Sunday. As many as 10,840 litres of mustard oil, 7,922 quintals of rice, tarpaulin sheets, water pouches, biscuits, milk powder, dal, salt and other essential items have been distributed among the flood-affected people.

With more districts getting marooned in devastating flood, the Army has also been kept on standby for assisting the administration in rescue operations.

“Our personnel are kept on alert at several flood-affected districts across the state to assist the administrations in rescue and relief works. We have rescued so far 150 marooned people especially from Baksa district in lower Assam. The Army will provide all necessary help at the time of distress,” an Army official said

The water level of Brahmaputra was maintaining the increasing trend as it has crossed the danger level all across the state due to incessant rainfall in the northeastern states.

The flood has claimed lives of at least 15 people in Assam and has affected the lives of more than 26.5 lakh people in the state. On Monday, the water of Brahmaputra entered into the area of Fancy Bazaar, Uzanbaazar, Pandu and other parts of the capital city.

The Assam chief minister himself visited worst flood-hit district of Barpeta and reviewed the situation on the spot.

The rains and floods have affected as many as 28 districts.

Barpeta is the worst hit with 7.35 lakh people affected, followed by Morigaon where 3.50 lakh people are hit. They are followed by Dhubri where the number of affected is 3.38 lakh, the Assam Disaster Management Authority (ASDMA) said.

A crop area of 87,607.43 hectare is under water in the 28 districts; in Golaghat district alone 5,070.23 hectare submerged. The current spate of flood has also affected nearly 30 lakh livestock in the state.

Meanwhile, at least 15 trains connecting Silchar in Barak valley and Agartala in Tripura remained cancelled since Friday. Train services had to be cancelled following restoration works on the damaged stretch of railway tracks between Jatinga Lumpur- New Harangajao under Lumding-Badarpur hill section of the railway. Heavy rain led to a portion of the tracks to cave in on Friday. Train services is likely to resume on Tuesday.