India   All India  16 May 2018  Why is the govt tolerating treachery by Pak-paid pawns in the Valley?
India, All India

Why is the govt tolerating treachery by Pak-paid pawns in the Valley? 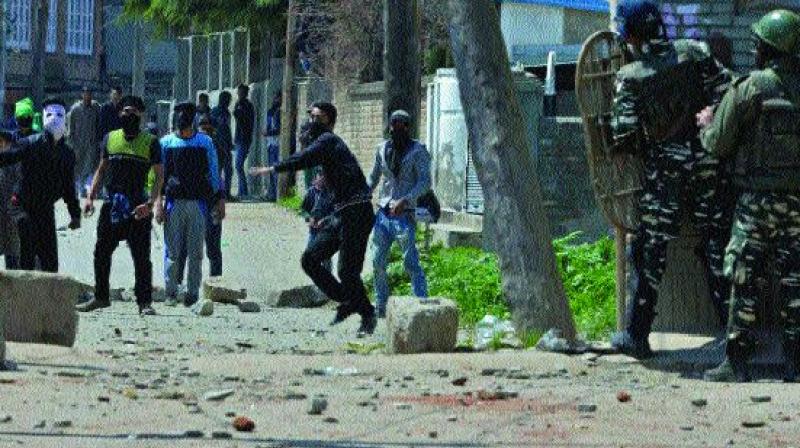 One child and one tourist were killed. While schools/education have been Pakistan’s Kashmiri pawns’ targets for some years, post-Burhan Wani’s killing, about 40 schools were burnt/destroyed. Tourists mean livelihood of a lot of Kashmiris.

No matter how strong the actions taken by the Army across the Line of Control and in the hinterland are, no matter how many surgical strikes are launched, etc, terrorism in the Valley will continue till the terror-funding and dissent-spreading traitors/separatists are around...

An article titled: “Fighting Pakistan’s dirty war in Kashmir Valley amid bad politics”, written for and uploaded by an agency on June 26, 2017, was widely published in South Asia region under the same title. However, at least one publication published the article under the tongue-in-cheek title “Impose central rule in Kashmir: Ex-Army colonel’s fix for Pak’s ‘dirty war’”. That may be owing to this writer relentlessly recommending in conclusion to over 100 articles over the years, including many in this newspaper, that Pakistan-sponsored terrorism, radicalisation, stone-pelting, murders of innocent Kashmiris, ruination of education, etc, can only begin to end after all those “politically correctly” referred to as “separatists” are put into jails outside the state of Jammu & Kashmir.

The mentioned article was based on events related to the heinous abduction from a marriage ceremony in Kulgam town and killing of Lt. Ummer Fayaz Parray, followed by the brutal massacre and mutilation of six J&K policemen in Anantnag district and the barbaric lynching of deputy superintendent of police Ayub Pandith by a mob outside Srinagar’s Jama Masjid, marking a then unprecedented high in the Pakistan-sponsored and supported proxy war and radicalisation of the Kashmir Valley.

Particularly Pandith’s lynching by a mob only reinforced the fact that the separatists have sunk to their lowest in killing Kashmiriyat, which they claim to champion and expose them once again as vermin for the Valley.

Further, the killings of police personnel and Pandith, in charge of Mirwaiz Umar Farooq’s security detail, being killed outside the Jama Masjid, where Mirwaiz was holding forth with his provocative discourse, both during Ramzan, only add to the utter dastardliness of the separatists-read dangerous traitors. At that time Army Chief Gen. Bipin Rawat had said: “This is a proxy war and proxy war is a dirty war. It is played in a dirty way. The rules of engagements are there when the adversary comes face-to-face and fights with you. It is a dirty war... That is where innovation comes in. You fight a dirty war with innovations... People are throwing stones and even petrol bombs at us. If my men ask me what do we do, should I say, ‘just wait and die? I will come with a nice coffin with a national flag and I will send your bodies home with honour’. Is it what I am supposed to tell them as chief? I have to maintain the morale of my troops who are operating there.” Gen. Rawat also wholeheartedly defended Maj. Leetul Go
goi for using a Kashmiri stone-pelter as a “human shield”, an action which was praised/approved by many, including Attorney-General Mukul Rohatgi, who did not mince his words when he stated in the media: “The recent report about a stone-pelter tied to an Army vehicle helped contain stone-pelters and saved the poll officials.” Gen. Rawat said that as the Army Chief, it was his duty to maintain the morale of the Army personnel in J&K and by awarding Maj. Gogoi he did exactly that.

In the past few days of early May 2018, these traitors/separatists have exceeded all previous aims by directing their stone-pelters to target even young school children and tourists. One child and one tourist were killed. While schools/education have been Pakistan’s Kashmiri pawns’ targets for some years, post-Burhan Wani’s killing, about 40 schools were burnt/destroyed. Tourists mean livelihood of a lot of Kashmiris. If they too are being attacked by the network of these traitors/separatists, then it can be imagined what is left in the Kashmir Valley.

And this is what the Army Chief said in an interview to a newspaper shortly after the 22-year-old tourist from Tamil Nadu was killed by the stone-pelters: “I want to tell Kashmiri youth that azadi isn’t possible. It won’t happen. Don’t get carried away unnecessarily. Why are you picking up weapons? We will always fight those who seek azadi, those who want to secede. (Azadi) is not going to happen, never… Once a stone is thrown at us… once they fire at us… then there is no way we will not respond and respond sternly. Those who want to fight us, we will fight them.”

Both times, while the traitors/separatists, opposition self-goal scorers, apologists, pseudo-secularists, leftists, pseudo-intellectuals, etc, have criticised the Army Chief for his statements, there are as many or more who have supported him for what he said.

Why does chief minister Mehbooba Mufti want the Central government to halt security force operations during the forthcoming month of Ramzan and the Amarnath Yatra? Pakistan’s Army, its terrorists and its paid pawns, the traitors/separatists have all been known for desecrating many religious festivals by continuing and at times even stepping up attacks during Ramzan and the Amarnath Yatra. It may be recalled that on July 11, 2017, during the Amarnath Yatra, terrorists launched a dastardly attack on a bus ferrying pilgrims and killing seven Gujarati women and children as well as injuring 19 others. There have been many cases of terrorist attacks in the Kashmir Valley both during Hindu and Muslim festivals.

This request by Ms Mufti and Kashmiri political parties for a ceasefire during the Amarnath Yatra and Ramzan has come as both Pakistani and Pakistan-supported Kashmiri terrorist groups in the Valley have been under severe pressure by the Army, security forces and J&K police resulting in many top terrorist leaders being killed. This operation must be continued without any ceasefire.

There is a fair constituency of Kashmiri youth, who do not subscribe to radicalisation and rioting, but who want to get ahead in life within the Indian system. This has been proved by the response to many recruitment tests by the Army and J&K police, where up to 1,500 applicants have been showing up. Terrorists and their supporters are intimidating young Kashmiris wanting to join the Army, police or security forces. Many J&K police personnel’s homes have been raided by terrorists/their supporters to threaten them for discharging their duties.

Separatists have also issued diktats against sending children to Army’s goodwill schools, which can not be burnt and where students have been faring well, accusing these schools of compromising “Kashmiriyat”, which actually is being erased and replaced with Wahabism by Pakistan-supported Kashmiri terrorists of Hizb-ul-Mujahideen and the separatists, who are not even sparing their own fellow Kashmiris.

The irony is the proxy war by terror and radicalisation perpetrated by Pakistan (through the traitors/separatists) continues to enjoy government-funded facilities. Why are these separatists not in jails for committing various crimes and aiding acts of war against India? Why are they being allowed to continue their deadly activities? Why is the government keeping mum even as some Indian political leaders, apologists, peaceniks, pseudo-secularists, pseudo-human rights activists continue to vilify the Army and the security forces?

No matter how strong the actions taken by the Army across the Line of Control and in the hinterland are, no matter how many surgical strikes are launched, no matter how effective other security forces are since the BJP’s taking over in 2014, terrorism in the Valley will continue till the terror-funding and dissent-spreading traitors/separatists are around. House arrests do not affect their disastrous activities; even putting them in jails in J&K will not stop them. While the traitor/separatist leaders must be put in jails outside J&K, all their network of organisers must be effectively disabled. Only then can we hope for a meaningful peace in the Valley.