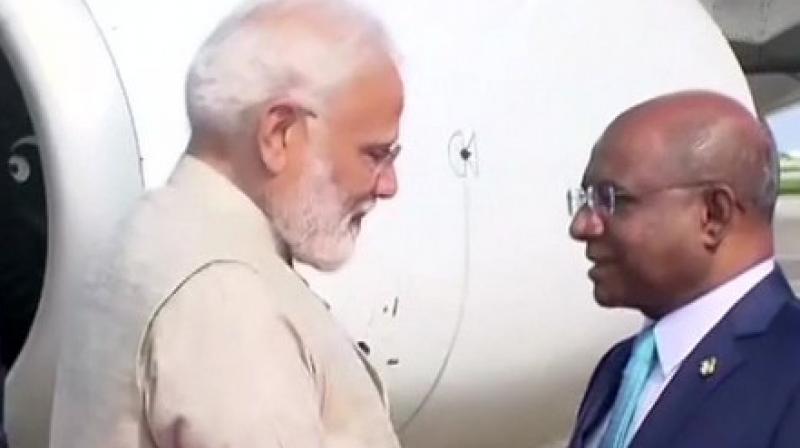 New Delhi: External affairs minister Dr. S. Jaishankar and Maldivian foreign minister Abdulla Shahid co-chaired the sixth Joint Commission Meeting (JCM) between India and Maldives on Friday in New Delhi, where the “ongoing cooperation in our security and defence partnership was reviewed”. Three pacts in various fields were also inked between the two sides. The “restoration of Hukuru Miskiiy/Friday Mosque was identified as a priority and the JCM welcomed the fact that an Indian technical team is already in male for its conservation”. The Maldivian foreign minister also called on Prime Minister Narendra Modi, who “reiterated India’s commitment to partner the government of the Maldives for a strong, democratic, prosperous and peaceful Maldives” and “noted with satisfaction the enhanced level of engagement between India and Maldives and the positive outcomes of bilateral cooperation during the last one year”. The Maldivian foreign minister also expressed his deep appreciation to PM Modi “for India’s support in various development cooperation initiatives that are currently being implemented in Maldives” and also “conveyed the commitment of the leadership of Maldives to its ‘India First’ policy and to further strengthening the relationship with India”.

“Ongoing cooperation in our security and defence partnership was reviewed. India-Maldives defence cooperation includes key infrastructure projects such as construction of the Composite Training Centre for the Maldivian National Defence Forces, and ministry of defence building, and the setting up of the Coastal Surveillance Radar System, as well as training programmes for MNDF officials in India, joint exercises, medical camps, etc,” the MEA said.

The MEA added, “The Maldivian side acknowledged the usefulness of CGS Kaamiyaab gifted by the government of India for the enhancement of its maritime security. Both ministers emphasised the nurturing of a strong bilateral partnership in the maritime domain given the shared interests and common challenges in the Indian Ocean Region. Both sides agreed that joint working group on counter terrorism, countering violent extremism and de-radicalisation will meet at an early date to strengthen cooperation required to combat the common threats arising from terrorism, radicalism and drug trafficking in the region.”

“The two ministers reviewed progress achieved in implementing the vast and ambitious agenda of bilateral cooperation agreed between the two countries. The discussions at the JCM were held in a friendly atmosphere reflective of the close and neighbourly ties between India and Maldives. Prime Minister Narendra Modi and President Ibrahim Mohamed Solih have met on four occasions in the past year illustrating the highest importance both India and Maldives attach to the bilateral relationship. Both sides noted that India’s ‘Neighbourhood First’ policy and Maldives’ ‘India First’ policy were working in tandem to further strengthen a dynamic, multifaceted and mutually beneficial partnership that rests on the foundation of mutual trust, understanding and sensitivity to each other’s concerns,” the MEA further said.

“The past one year has seen significant expansion in the scope of the bilateral development partnership. Both sides acknowledged the progress achieved in implementing the USD 1.4 billion economic package announced by India in December 2018 and noted with satisfaction the forward movement in the implementation of critical infrastructure projects under the USD 800 million Line of Credit. The USD 5.6 million High Impact Community Development Projects (HICDPs) and the USD 6.9 million grant assistance projects, which have been launched, have the potential to transform the livelihoods of communities in Maldives. It was agreed that all these projects will be closely monitored to achieve quick implementation through transparent processes,” the MEA said.